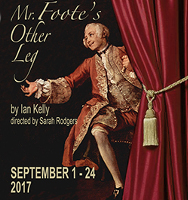 A playwright’s skill is the foundation of great theatre. Talented performers can bring a worthy script to life, and able production teams can polish the work into a piece of art. To the delight of the audience, this United Players presentation of Mr. Foote’s Other Leg has assembled a team of actors and production personnel to do just such justice to Ian Kelly’s brilliantly written tribute to a key historical figure in the development of live theatre as we know it.

The troupe takes us on a wild ride through vignette-like scene patches sewn together into a colourful plot following the raucous professional life of Samuel Foote, a satirist, impresario, and actor of questionable repute during the Georgian era in eighteenth-century London. The entire production is seamless, from the impressive sets to the discreet and subtle sound effects and effective lighting. John Harris’ production management provides a living stage that breathes with the play, allowing the actors to enliven the blood and guts of this ribald comedy.

Sarah Rodgers’ directorial experience shows in the superb action and balance of all aspects of the performance. The pace is energetic, the dialogue, quick, and the action, focused, illustrative and spellbinding. Kazz Leskard shines as the controversial Samuel Foote. With him, we love and appreciate Foote’s entire controversial persona - critically satirical, raunchily fun-loving, and seriously focused on nurturing and developing the world of theatre. No less noteworthy is Elizabeth Willow as Peg Woffington, Foote’s faithful acolyte. Her strong advocacy of Foote’s vision and varied rebuffs of overtures from David Garrick show admirable range in her performance. Francis Winter’s presentation of Garrick, another figure involved in promoting theatre during this period, was equally admirable, demanding a variety of perspectives, from disappointment in love, to faithful friendship, to determined competition with Foote’s vision of the proper place of theatre in society.

Bethany Stanley’s portrayal of Mrs. Garner, the all-purpose stage hand in Foote’s theatrical endeavours, is especially strong and noteworthy. Stanley effectively shows how Garner’s social class allows a wider range of emotional expression than others in this circle. Russell Zishiri is endearing as Foote’s personal aide, showing appropriate humility, fidelity and umbrage as situations arise. Joel Garner’s Prince/King George III is surprisingly affable. Garner cleverly portrays the king’s historically recorded insanity as not so obvious when cast against the shenanigans of Foote’s entourage. Simon Webb as the intellectual Dr. John Hunter (and crucial surgeon in Mr. Foote’s case) and Kenta Nezu as Benjamin Franklin were effective and likeable in calming the frenetic action that dominated. Finally, kudos go to Shona Struthers and Aidan Wright. Their understated, discreetly placed presence as musicians and sound effect producers, as well as on-stage characters, brought appreciative notice.

Mr. Foote’s Other Leg is a play that keeps us laughing from start to finish, using all comedic techniques from satirical wit to puns to situational comedy. The writing is magnificent, the production and direction, masterful, and the acting, engaging and endearing. It is not for the faint-of-heart, or for the ultra-moral. It is, however, for lovers of excellent theatre. Do attend!