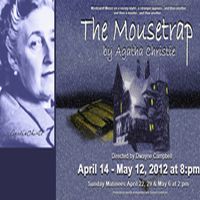 Director Dwayne Campbell did a superb job directing this Agatha thriller, as well as the set which he designed. The cast also did an ingenious task entertaining the matinee audience last Sunday with their odd characters, all suspects of a murder. But knowing Agatha Christie, the one least suspected always ends up being the culprit.

There was even a raffle for last Sunday's show--the one who got it right would get two theatre tickets for the last production of Metro's 2011-12 season, Jane Austen's Emma. As usual, most of us got it wrong when we found out who the murderer was in the second act, and left after curtain call. The ones who got it right I suppose waited for the raffle after curtain call. They probably saw the show or read the play and knew whodunnit..

Since it first opened in the West End of London 60 years ago, in 1952, this play has been and is still being presented all over the world by schools, community and commercial theatres,