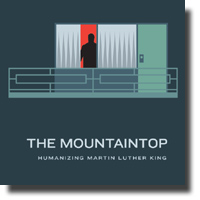 The Mountaintop by Katori Hall

Despite its prophetic title, all the action in Katori Hall’s provocative, single act play takes place indoors, or more precisely in room 306 at the Lorraine Motel in Memphis on April 3, 1968. The time and place is significant in as much that it was where the Reverend Dr. Martin Luther King, Jr. spent his final hours before succumbing to a bullet fired by assassin James Earl Ray.

It seems almost impossible to escape stories about the American Baptist minister and civil rights activist these days. Ava DuVernay’s film Selma based on the Selma to Montgomery protest march, which, in a couple of weeks (March 7) marks its fiftieth anniversary, is receiving a lot of positive attention.

In Katori Hall’s quixotic vision, King is returning to his motel room having just addressed a rally and delivered his "I've been to the mountaintop" address in support of black sanitary workers. King is physically and emotionally exhausted, coughing uncontrollably, he calls to Ralph Abernathy to bring him a packet of cigarettes and phones room service for coffee. The cigarettes never arrive (it’s generally accepted that Abernathy shared the room with King, but is never seen and only loosely referred to in this play), but the coffee arrives immediately, delivered by Carmae, an attractive maid who turns out be much more than an obliging motel employee. Carmae sustains King through some soul-searching on his last night on earth.

Ms. Hall sets her play in real time, so that the action correlates with the play’s ninety-minute run time. She also uses a common device of placing a historical moment in time in a fictional setting. That in of itself is fine, but I’m not sure that taking a watershed act of violence and using theatrical stratagem to present a dichotomy of the ordinary and the omniscient of a historically lauded figure is particularly satisfying. The play comes close to absurdism when King believes he’s talking to God on a cell phone.

Dion Johnstone, who to his credit doesn’t attempt to impersonate King. He does however, manage to bring off the real tension in the play – that is between his character’s true self and his perceived persona. Crystal Balinte brings real attitude to the portrayal of the street-wise Camae; initially in awe of Dr. King’s stature, she quickly becomes coquettish, then conspicuously gains in wit and wisdom as her relationship with King develops.

Director Janet Wright (yes, Emma on Corner Gas) guides with a clear and sure touch, maintaining an even pace throughout. Ted Roberts’ set is a remarkably authentic re-construction of the motel room, complete with twin beds, desk and a window with a view of the bad weather and the motel’s illuminated sign board (did it have only one ‘r’ in Lorraine?).

The Mountaintop concludes on an inspiring note. In an optimistically created video montage we see that while Dr. King’s “dream of the Promised Land” hasn't come true yet – it is possible.