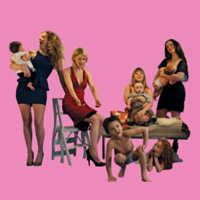 The Cultch in association with The Motherload Collective

Motherload is a vulnerable, authentic, and intimate production about parenthood as experienced by four mothers in Vancouver. When the show premiered at the Cultch last year, it was an autobiographical account of being a mother by the original creators and performers.

Both productions are strong and I didn’t notice much difference between the two except for two new actors. The play is often very funny and equally poignan.

One of the biggest strengths of Motherload is its authenticity. As this production features two new performers acting the experiences of Sonja and Juno, those roles felt a little less authentic and vulnerable this time around.

I was curious about and would have welcomed hearing about the lives of the new cast members’ experience of being a mother (if they are parents). This would have also provided new content for those that have enjoyed the show before.

For those who haven’t seen the original production (or its remount at the Evergreen Cultural Centre), I highly recommend that you see Motherload, particularly if you are a parent. Emilia Symington Fedy (The Chop Theatre) is one of my favourite local creators and performers and also has a wonderful and honest blog about life at www.TryingToBeGood.com