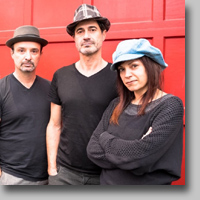 The Firehall Arts Centre in association with Haberdashery Theatre Co.
The Motherf**ker with the Hat by Adly Guirgis

The Motherf**ker With The Hat, written by Stephen Adly Guirgis, is the story of misplaced love, substance abuse, duplicity, and betrayal - yet, in spite of its relatively grim subject matter, the play succeeds in keeping things very funny and entertaining.

The set design for this production is excellently executed. Vibrant and detailed, colourful graffiti-covered walls and 3 separate apartments are effectively illuminated during their designated scenes. A drummer/percussionist (seen performing outside the theatre before the show, a nod to the Firehall’s eclectic downtown eastside locale) delivers rapid-fire beats between scenes, echoing the similarly unhesitating dialogue in this profanity-laden play.

The story revolves around Jackie, who is a freshly-paroled recovering addict, looking to reunite with his girl Veronica and start a new job - a fresh start. This is where the play opens, on an animated Jackie (played by Stephen Lobo) whose fervour is stopped short by finding a mysterious men’s hat in Veronica’s apartment.

Lobo switches effortlessly between morose and furious in the part of Jackie, and the sharp-tongued dialogue between Jackie and Veronica (played amazingly well by Kyra Zagorsky) is quick, entertaining, and doesn’t miss a beat. Later, Jackie meets up with his AA sponsor, Ralph D (played by John Cassini). Ralph throws down a lot of 12-step wisdom at Jackie’s anger and frustration, and persuades him not to take violent action against the “MF with the hat”.

Cassini as Ralph reminds me a lot of Vince Vaughn in Swingers with all his fast-paced, confidence-boosting pep talks (I kept expecting him to tell Jackie how “money” he was), except that Ralph’s duplicity is foreshadowed throughout the play. In fact, the theme of two-facedness is rampant - Jackie’s cousin Julio describes the gap between who Jackie thinks he is, and who he really is, as ‘embarrassingly wide’.

Julio (played by Francisco Trujillo) is the lovable, effeminate Puerto Rican and is played somewhat clownishly and over-the-top, but he is also arguably the only character with a moral compass, and Trujillo gets to deliver some of the more sobering lines of the play, calling his cousin out for his reactiveness - “in love, even one name is too many.”

Although Lori Triolo as Victoria (Ralph’s wife) doesn’t get much face time on stage, her performance is unforgettable as a frustrated addict coping with her husband’s infidelity and her own substance abuse. Her self-medicated pain is palpable, plus both Triolo and Zagorsky as the female leads get huge respect for their bang on New Jersey accents.

While the play itself isn’t life-changing, and thematically probably won’t resonate deeply with many people, Director Brian Markinson and his entire team deserve recognition for this very entertaining, very engaging production. I think it achieves what it sets out to do - offering a few laughs and entertainment.