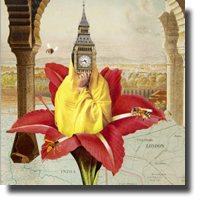 Mother Teresa is Dead is a contemplative and deliberately emotional affecting play by British playwright Helen Edmundson. Despite the intriguing title, it’s not directly concerned with the diminutive Albanian nun who, after her death became known as Blessed Teresa of Calcutta.

Instead, Edmundson’s play focuses on a young English woman who abandons her husband and five-year-old son to follow an impulse and work in a shelter for orphans in Madras, India. The play opens as Mark (Sebastian Kroon), arrives by taxi at the home of Frances (Katherine Venour) to trace the whereabouts of his wife Jane (Julie McIsaac).

Mark is easy to dislike. He comes across as a boorish, chauvinistic bigot, with a hostile belief that every stranger is against him. He demands answers without being sure of the questions. Jane has already been in India for seven weeks and has recently suffered a breakdown, presumably a result of neurosis brought about by a conflict of loyalties between love of her son and a perceived responsibility to victims of poverty. She has since taken refuge with Frances, a divorced British ex-pat. Frances, a portrait painter, appears to be enjoying a halcyon lifestyle in a comfortable home. It’s through Frances’ dialogue that we glean the complex narrative.

When Srinivas (Kayvon Kelly), an Oxford-educated Indian and articulate director of the shelter where Jane has volunteered, arrives on the scene, he immediately draws rancor from Mark and heightened confusion from Jane. Srinivas is much less a selfless humanitarian than a career charity-operator. Will he be able to exploit Jane vulnerability and persuade her to stay, or will Mark convince her that home is where her heart should be? And what is inside the white plastic grocery-bag that Jane takes everywhere she goes?

Director Evan Frayne and his quartet of stellar actors present Edmundson’s weighty premise with credible clarity in spite of the play’s few shortcomings. The playwright twists the storyline in the second act by making Jane and Frances victims, not so much by their own previous actions, but at the hands of Mark and Srinivas respectively.

Ms McIsaac offers a sublime performance as a confused idealist meandering in a neo-comatose state, pulled by equal and opposite demands on her fragile psyche. Ms Venour is solid as the narrative anchor.

Messrs Kroon and Kelly each acquit themselves ably in arguably easier roles. Though in Kroon’s case, less volume in his hectoring would surely not have perceived his rage as any less intense.

Florence Barrett handles many production elements - that means lighting, set and costume design. She gets help from Catrina Jackson with the costuming that shows imagination and pragmatism and James Coomber looks after designing the sound. The decision to split Pacific Theatre’s small stage between Frances house and garden is perhaps a tad too ambitious and left little room for movement when all four actors were present.

Mother Teresa is Dead is another thought-provoking presentation by Pacific Theatre that will leave audiences with much to ponder about until the next production.