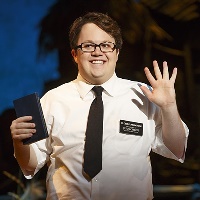 The Book of Mormon book, music and lyrics by Trey Parker, Robert Lopez and Matt Stone

Who hasn’t opened their front door to find a clean-cut young man with a crisp white shirt and a wide smile and a cheerful “Hello.” Just before you (hopefully) politely send him on his way, he earnestly inquires “Is there anything missing in your life?” It’s not by any means an unpleasant experience, but one would hardly expect that Mormon evangelizing could be the premise for a musical comedy.

Actually “Hello” is the first song we hear sung with unpretentious exuberance by a group of white-shirted evangelists. The musical chronicles an “odd couple” of Mormon missionaries sent to Uganda to spread the word. Elder Price is played with a Jim Carey zaniness by Ryan Bondy, while Cody Jamison Strand plays Elder Cunningham with a Rob Schneider goofiness.

The Book of Mormon doesn’t just push the buttons of impropriety, it slams those buttons with a closed fist. It’s indeed surprising that the show hasn’t created more controversy than it already has. Caricaturing The Church of Jesus Christ of Latter-day Saints, or for that matter any Christian faith is picking on a soft target. The show’s creators are not known for their restraint in lampooning revered institutions (just watch South Park). Disney’s Lion King gets parodied and Uganda gets hit below the belt. The East African country has had her share of problems, but from personal experience, it’s not nearly as primitive as Trey Parker, Robert Lopez and Matt Stone expound.

If there were Mormons or Ugandans in the audience, chances are they would have been more amused than offended and Disney surely has a tough skin. Mormon gets mildly blasphemous with the showpiece song “Hasa Diga Eebowai” (not actually Swahili language) which hurls the ‘F-bomb’ at the Almighty. The comic thrust in The Book of Mormon is a curiously puerile blend of sugar and satire. Most of the time the highly talented cast manage to pull it off. The area where the show may actually cross the line and most definitely forfeit its status as a family show is in the over-the-top depiction of bestiality.

Ryan Bondy and Cody Jamison Strand handle the lead roles of misplaced missionaries with assuredness and audacity. But for me, Memphis native Candace Quarrels (love that name) as the villager Nabulungi comes pretty close to stealing the show. Her two solos: “Baptize Me” and “Sal Tlay Ka Siti” (Salt Lake City), where she proclaims the Mormon capital to be “the most perfect place on Earth,” are delivered with artistry and whimsy. Among the supporting cast, Edward Watts showed ample flexibility in covering four differing roles.

The songs are delightfully whimsical and entertaining in the context of the show, but with the possible exception of reggae inflected “Hasa Diga Eebowai,” unlikely to be remembered the next day.