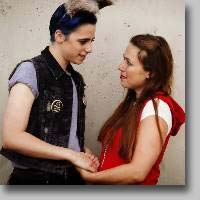 The first thing that came to my mind as I was watching this musical was that it resembled more of a panto than a musical, as it parodies a lot of current situations and at the same time, using pop music with lyrics changed sometimes, but at other times like the Beatles' Revolution, staying in tact. It also gets the audience to boo the villains Granny (Natalie Schreiber) and Hunter (Bradford Pellerin)..

This is the first production of this company led by Lisa Simon who wrote, directed and choreographed this show. I think the main thrust of the show dealt with LGBTQ concerns. The main parody was that Cinderella (Danni Bergeron) and the Prince (Christopher Hall) were played as gay men. The secondary theme was the lesbian relationship between Little Red Riding Hood (Julia Fox) and the Wolf (Sasja Towe). This is where the dark side comes in: the perversity of a homosexual relationship and in the latter case, even darker--the relationship between human and animal..

Ever since Sondheim did his dark musical Into the Woods, everyone is following suit with all kinds of interpretations about the traditional Fairy Tales we've known in the past. In this particular script, LQBTQ appears to be the approach. Although I don't agree with the concept of gender neutrality, it's good to have different views of the traditional fairy tales we read as children. Times have changed and current concerns are different from what they were in generations past.

From the production angle, the show was quite good and entertaining. There was a mix of seasoned veterans and new stage actors who were freshly graduated from drama schools in the country. From the production angle, my only peeve was the sound. Some of the voices came out too loud, and most of the time, I couldn't hear them sing because either the microphones weren't working well or the sound man wasn't alert enough to adjust the mike volumes. But other than that, for a semi-amateur/professional production, it came out okay. Music Director Corrigan Cassidy seemed to be directing an orchestra, but apparently, it was all canned music. He was actually conducting the singers.