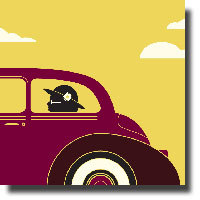 Having already sent this production out on tour around various venues in Metro Vancouver plus Saltspring and Nanaimo, Arts Club Theatre now brings it to the Granville Island Stage for a month run.

Notwithstanding that Driving Miss Daisy was first a Pulitzer Prize winning play, the film version is much better known due in large part to fine performances by Jessica Tandy, Morgan Freeman and Dan Aykroyd.

Set in Atlanta, between the late forties and early seventies, the play begins with Boolie Werthen (Brian Lind) trying to convince his mother, Daisy Werthen (Nicola Lipman), a wealthy Jewish matriarch to desist from driving her own car in favour of hiring a chauffeur. Despite just having been involved in a serious accident, totalling her brand new Packard, Miss Daisy is fiercely reluctant to give up her independence. Nonetheless, Boolie goes ahead and hires Hoke Coleburn (John Campbell), a proud black man with little formal education yet possessing a gentle wisdom. As expected, the relationship between Miss Daisy and her new chauffeur gets off to a thorny start. However, over the next quarter-century against a subtext of American political change, we see how their punctilious relationship develops into a friendship based on commonality of circumstance.

The passing of time is brought about by historical events to give the audience a frames of reference, as well as the actor’s nuanced mannerisms of advancing age. Pulling these elements together is the job of director, Mario Crudo.

Staging a play like Driving Miss Daisy presents its own set of problems for any production company, not least of which, is that much of the action takes place in and around a car. The vehicle’s seating comprises of a wooden bench for the passenger and a chair for the driver – the same as used for other scenes. Doors opening and closing are enhanced by off stage sound effects. John Campbell as Hoke does his best with miming the operation of the steering column gear-shift and accelerator and brake pedals, but I was never entirely convinced that such a vital component couldn’t have been done better. I’m sure I even noticed on one occasion, Nicola Lipman getting in the car without opening the door.

Nicola Lipman, a frequent choice of Arts Club Theatre, once again displays consummate artistry in portraying a character much older than herself. Toronto based John Campbell, who forfeits diction in favour of authenticity, is nevertheless convincing as Hoke, a man of quiet dignity. Brian Lind, who also takes on responsibility of sound design, provides solid support as Miss Daisy’s discerning son, Boolie. Though, he doesn’t appear to exhibit the range to demonstrate physical decline into old age.

Alfred Uhry's chef d'oeuvre offers a poignant perspective of what were significant social issues in America’s south, but it’s the performances that give this play real substance.