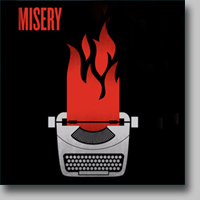 Arts Club Theatre Company ON TOUR
Misery by William Goldman, based on the novel by Stephen King

Half of the house stood up in ovation at curtain call for the two main characters of the show, Lucia Frangione and Andrew McNee during opening night at the Surrey Arts Centre last January 10th. I was impressed by the acting of these two actors but even more impressed by the innovative set design of Lauchlin Johnston.

However, I wasn´t very impressed by the stage adaptation of Goldman who also did the screenplay starring Kathy Bates and James Caan which was more frightful as a film than as a stage production. In fact, in this stage version, there were moments of laughter which wasn´t the case in the movie because the movie, like the novel, is terrifying, true to the colours of Stephen King.

For those not familiar with this novel-screenplay-stage version, it´s about a successful romance novelist Paul Sheldon (McNee) who is rescued from a car crash by his “number one fan,” Annie Wilkes (Frangione). While Annie nurses him back to health, Paul soon realizes that he is not her guest, but her captive. Angered that he has killed off her favourite character, Misery, Annie forces Paul to resurrect her in a new book. Paul soon finds himself writing for his freedom…and his life.

I like the horrific, bloody stage effects in the last scene which was true to King´s style, as well as other scenes which were horrifying. But all in all, I prefer watching King´s novels as film rather than as stage productions.