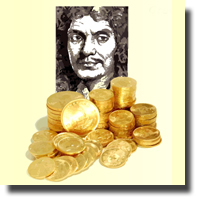 When you have a classic like Moliere's The Miser (which most probably influenced the character of Ebenezzer Scrooge) and you have professional actors doing this, there's no doubt that the play will be a success. Even if the play was a staged reading, the actors delivered as though they didn't have scripts in their hands.

Richard Newman (Harpagon) was superb in the lead role. Anthony F. Ingram (Lafleche/Marriage Broker) played both these roles with utmost versatility. Kayla Deorksen (Elise) and Brett Harris (Valere) were very comfortable with each other as lovers, and their delivery of lines was flawless. Daniel Meron (Cleante) started off cold, but as the play progressed, he started to get into character. Lois Anderson (Frosine/Madame Poquet) was fantastic. She was comfortable with her lines and in my opinion, was the best thespian in the cast.

Katie Takefman (Marianne) fit her role to the T as the beatiful but poor girl friend of Cleante. Brendan McClarty (Maitre Simon) got an applause for his acting in one of the scenes. His role as the Maitre of Harpagon was well acted. Sebastien Archibald (Inspector Sans Clou) did a wonderful job as the Inspector with no clue, as his name suggests. He reminded me of Peter Sellers' role as Inspector Clouseau in Pink Panther.

John Innes (Senor Anselm) played his part with dignity as the Spaniard from the long-winded name of a town close to Barcelona, looking for his lost long children. And last but not least is Chris Cochrane (Monsieur Jacques), the cunning money lender.

This was a fine production and I tip my hat to Director Anna Hagan and the production staff for an excellent mise-en-scene.