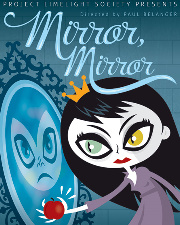 It's interesting and refreshing to see a panto composed of only children. This is something unique and I commend producers Maureen Webb and Donalda Weaver of Project Limelight Society for their efforts and generosity in creating a performing arts program at no cost to young people living in and around Vancouver's Downtown Eastside.

This is the third show to be produced by Project Limelight and it was a fun and energetic take on the classic fairytale Snow White. It featured 18 young performers, ages 8 – 13, and they were excellent. Just one suggestion: work on projection, especially with a capacity crowd in last Sunday's 2pm show. The more people there are in an auditorium, the more you have to project your voice. Some of the kids did have good voice projection, especially the main characters Snow White (Ombu) and Queen Evilynne (Sierra), but the others needed more voice work.

However, the jam-packed audience composed of the young and the young at heart enjoyed the performance and in the tradition of pantomime, they interacted with the actors, singing and clapping, booing at the villains and applauding Snow White and the good fairies.

Kudos to all the actors and the production staff for a wonderful performance!