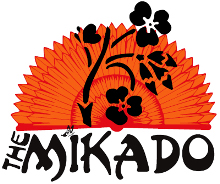 Exactly six years ago, I reviewed this show which was presented by FVGSS at the Surrey Arts Centre. I enjoyed it and again this production was likewise enjoyable. The usual Gilbert & Sullivan antics, such as secret identities, forbidden love, surprise twists, reminiscent of the commedia dell'arte are all part of their style. FVGSS did something of a panto in this production where lines were adapted to the contemporary and local settings, such as inserting high-tech phrases like "e-mail money transfers" or references in the dialogues to the Canucks' "regular season", Surrey and the White Rock Players .

The star whom everyone wanted to come and see was the Mikado himself played by none other than the Canucks’ opening tenor, “Mr. O Canada”, Mark Donnelly who put in a superb performance.. Mark’s son Sean who played The Beast in FVGSS's Beauty and the Beast panto last Christmas plays the Mikado’s son, Nanki-poo. A family affair, indeed.

Fraser Valley Gilbert & Sullivan Society celebrates its 30th anniversary season with the staging of this production. The show stars Sean Donnelly ( Nanki-Poo), Rebekah MacEwan ( Yum-Yum) and James Walker (Ko-Ko). All those lines and arias--these three should really be commended for all that hard work!

But I'd say that Mark Donnelly as the Mikado stood out even if he only appeared briefly in the second act. You could tell that the Canucks' "Mr O Canada" was the most professional because he indeed is a professional entertainer. Cheering and accolades during curtain call also went to the versatile Adam Olguie (Pooh-Bah) for his acting. Jacqollyine Keath (Katisha) as the ex-fiancee of Nanki-Poo also did a wonderful job as the villainess. Everyone enjoyed the judo move she did on Ko-Ko.