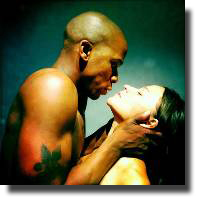 The play opens with a smoky haze drifting over the stage floor and the ghostly form of an indigenous ancestor (Tandiwe Nofirst Lungisa) parading round the stage playing a primitive instrument. The ancestor is invisible to everyone except Christine (Zoleka Helesi), the household cook. Christine’s gait is slow and laboured. She is physically broken from too many long days in servitude.

For much of its ninety-minutes the play unravels at intense fever pitch, as Miss Julie (Hilda Cronje), the white daughter of the estate owner and John (Bongile Mantsai) a young black employee are driven by their sexual tension. Since the dismantling of apartheid, miscegenation is no longer against the law, but it’s nonetheless considered taboo in many rural regions. John and Julie are fully aware of the consequences if they allow their carnal attraction to go too far.

Like many white children in South Africa, Julie was raised by the domestic help, meaning that the two grew up together mostly under the care of John’s mother Christine. John and Julie are in a constant power struggle, crossing back and forth over the narrow margin that separates love and hate. Their fighting is disturbing to see and their love-making uncomfortable to watch, and yet you are unable to look away.

Hilda Cronje gives a powerfully vulnerable and gut-wrenching performance as the titular character. Bongile Mantsai as Julie’s loveless lover, displays compelling physicality and movement. Both actors cope well with the extreme physical demands of their respective roles. Zoleka Helesi has a different challenge playing a character around thirty years older than herself, but she is no less solid in the role of the overburdened Christine.

There is some irony in setting the play on the Republic’s Freedom Day. Julie, John and Christine are hopelessly trapped in a savage cycle of inhumanity, unable to escape the sins of their progenitors. Even in some parts of South Africa, the more freedom you are given, the more a slave you become.