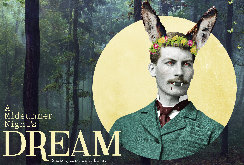 A Midsummer Night’s Dream stands out amongst the Shakespearean plays as being intensely imaginative, original, and wrought with mythological references. Studio 58, in its biting rendition, builds on Shakespeare’s approach by adding a layer of macabre fantasy to the already enchanting tale.

The play is enacted in a small arena theatre with the audience divided on either side of the room, creating an intimate atmosphere between the actors and their onlookers. Painted images of a shadowy forest surround the stage on three sides, while twisted black trees and reaching branches fill the room. The ominous atmosphere, embellished by a haunting tune over the speakers, greets theatergoers within moments of arrival, inevitably leading to an air of interest and excitement as the more curious begin to wonder how director Scott Bellis managed to weave creatures of the night in to this Shakespearean favourite.

The play begins with a humorous song and dance, introducing the Romanian town of Athens, its animated inhabitants, and their fear of the woods. The audience is introduced to the town’s Duke and his soon-to-be wife, as they plan the festivities of their wedding and hear an account of untimely passion and unrequited love. The play unravels true to the original - with the notable exception of a band of mischievous vampire-fairies and staggering zombies taking the place of the Fairy King and Queen and their minions. This ‘slight’ twist has some surprising repercussions of course, as the play teeters between comedy and horror in a playful fashion.

The cast of A Midsummer Night’s Dream does a wonderful job of bringing this over-the-top play to life. Especially impressive is the energy and acrobatics performed by Puck (Lili Beaudoin), the crazed jealousy of Hermia (Lauren Jackson), and the disturbing sounds and movements of the vampire hoard. Erik Gow’s portrayal of the ever-arrogant Bottom is also a highlight of the evening. One of my favourite scenes, however, comes at the end of the play as a roving band of would-be actors perform for a hilarious play within a play for the amusement of the Duke and his merry guests.

Like with many Shakespearean plays, it’s possible to find oneself lost in the dialogue at times, and a touch distracted by everything that is going on in some scenes. That said the actors speak their lines clearly while engaging with one another and the audience through body language and facial expressions.

The play is suitable for most ages, though may be better enjoyed by those who are familiar to the play yet comfortable with artistic license. Bellis certainly brings a new twist to an old favourite, bringing to the stage a creative yet familiar show for audiences to enjoy.