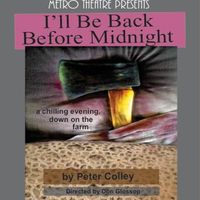 Metro Theatre
I'll Be Back Before Midnight by Peter Colley

I attended the first matinee performance of this show, and I was impressed by the actors, the set, the lighting effects and the direction. In fact, I was hearing comments from the audience afterwards saying, "Good show!".

Colley is one of Canada's most successful playwrights and he has written works in a number of genres. In this particular genre which can be tagged as a comedy thriller, he combines elements of Agatha Christie and Stephen King. There is the thriller-mystery aspect from Christie, and the more morbid special effects, with blood and gore, from King.

The playwright autocritiques this play by saying that "the audience should walk a tightrope of hysteria -- not knowing whether the next minute will contain a laugh or a scream". Indeed, we were as an audience always wondering what would happen next, which is what a thriller is all about. And the ending was really a big surprise, a melange of Agatha Christie and Stephen King.

I've always admired the sets (Heather Stewart) of Metro. I heards oohs and aahs and "What a wonderful set!" when the lights came up in the first act. The lighting from sudden dark to light as scenes transitioned were also quite effective. I even noticed lights signifying lightning aimed at the audience in one scene. The flashlight effect was also uncanny.

Kudos to the cast and crew for another successful production!