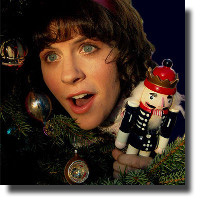 This delightful presentation enthralled the young audience and their parents and the older audience members who remember Christmas stories as magical and completely uncommercialised. Open the picture book and reveal the wonderful world of fairy godmothers, handsome princes, beautiful heroines, evil despoilers and happy endings.

This happens on stage at Jericho Arts Centre. Aided by the clever, fast-talking Ruler of David C. Jones, the trickster, commenter, general factotum and interactor between audience and cast, the show runs along happily, with enthusiastic audience participation amusing and well managed.

Missy Cross is charming as Clara, as she not only tries to repair the damaged Nutcracker, but as she joins his transformed character to Prince in their trail for the Nutcracker Prince’s crown, which she has mistakenly given away. Not only can she act, she also dances with great élan. As her sister, Frankie, Sydney Cochrane is a dancer who can act.

Colin Sheen, as the Nutcracker/Prince, is an athletic and graceful dancer and an actor of considerable talent. He also doubles in the role of Peter. Matt Pegues as both the mischievous brother, Mickey and the villainous Mouse King is outstanding as a dancer and a young and upcoming actor.

It is a delight to see Nancy Bell on stage again as the Fairy Godmother who casts her enchanting spell over both cast and audience, and ensures the happy ending of the production.

All in all the singing of the whole cast is adequate, and the dancing well choreographed and performed.
John Taylor’s sets are both clever and pleasing in the quick change from the comfortable, Christmas decked home of the family, and by the use of folding screens, to the journey to regain the crown.

This is enchanting entertainment for young children and those not so young can be enjoyed by all members of the family and is a wonderful Christmas treat for families and friends. The December 16th performance is in aid of the Aunt Leah’s Society.