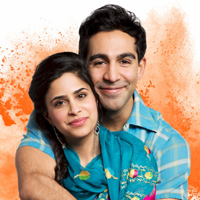 The distance between Vancouver and Mumbai is over 12,000 kilometres; the distance between the two cities on Amir Ofek’s set is a few feet. In Anosh Irani’s play The Men in White, the small stage is shared by two diverse locations as the action switches seamlessly betwixt Baba’s chicken shop in Mumbai and a cricket club’s locker room in Vancouver.

Anosh Irani is an Indian-Canadian novelist and playwright who moved to Vancouver from Mumbai nearly twenty years ago. He obviously knows much about the two cities that he features in his play. Growing up in India he likely knows quite a bit about cricket – a game, described by Sam, one of the play’s more colourful characters as “that goes on forever and no one understands.”

Irani really only uses cricket as a metaphor for achieving a dream despite great odds. The play begins with Hasan (Nadeem Philip) preparing chickens to serve Baba’s customers. Hasan is grateful to his employer and benefactor for paid employment, but yearns for a better life – possibly playing full time cricket. Hasan has a crush on Haseena (Risha Nanda), a medical student and frequent visitor to the shop, but can’t seem to make any kind of positive impression.

Over at the cricket club, some team members are having a post-mortem into the disastrous previous season. Abdul (Shekhar Paleja) believes he can offer a solution that will win more games. His younger brother is a natural all rounder and would provide a definite improvement.

But to import a ringer from a foreign country, the club would have to overcome immigration issues. Notwithstanding a few legal matters, the team also must overcome poor team spirit and inter-racial conflicts if they want to do well on the field.

The Men in White is a situation drama with elements of sport, racial identity and class. Sanjay Talwar as Baba and Raugi Yu as Sam manage to bring much needed levity to the production. Risha Nanda acquits herself ably in the lone female role. Nadeem Philip is probably too intense in the central role of Hasan. He is, perhaps, guilty of overplaying his part, leaving many in the audience doubting whether anyone so volatile would excel in a sport like cricket.

Thanks mainly to solid production qualities, The Men in White is certainly a taut and watchable play. However, the dialogue may still be a work in progress. Perhaps too, there may be a case for an alternative ending.