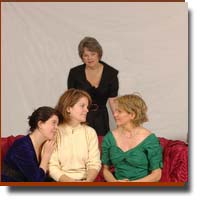 The Memory of Water by Shelagh Stephenson

There is something about this play that reminds me of a Catholic Irish wake where friends and relatives get drunk and talk about their memories of the dear departed. They bicker, laugh, cry: death is a three-ring circus, as the open coffin takes centerstage in the midst of all the action.

Stepehenson's play is full of rage and black comedy, and its main theme epitomises memory. The sisters' memories of their mother show that despite synchronicites of time and place they cannot agree upon one unifying experience. Stephenson must have also been influenced by the magic realism of Gabriel Garcia Marquez's narratives as the spiritual world collides with the real one.

The subject matter of aging and the loss of memory (Alzheimers), death, and remembering our loved ones runs throughout the play. The author refers to the mixture of water and wine in our veins, or in Vi's line, "some things stay in your bones", so that we are all part of the past - our heritage, our ancestors - all linked to our present.

The play opens with the mother, Vi ( Eroca Zales) who returns the night prior to her funeral, and sits at her dressing table, searching through the drawers. Her daughter Mary (Taylor Stutchbury) watches her as though she were alive, and they dialogue in a matter-of-fact way:

Mary: What do you want?
Vi: Someone’s been going through these drawers.
Mary: Not me.
Vi: What did you think you’d find?
Mary: Nothing

Gerry Mackay is extremely successful in directing this play. With seasoned thespians like Zales and Stutchbury, he is able to effectively deliver this powerful award-winning play (Laurence Olivier Award, 1996) which was later made into a Lewis Gilbert film Before You Go (2002), starring Julie Walters and Tom Wilkinson.

The female leads were fabulous. Zales as the ghost mother played her part as though she were one of the living, coming back to assure herself that everything is all right before she is laid to rest. Stutchbury as the middle sister and a doctor played her part extremely well as she interacts with her mother and her sister Teresa (Heather Cant) as they unravel secrets of the past.

Cant played her part as the eldest sister and an unhappy housewife quite impressively, especially the fight scene with her husband Frank (Simon Best) as they vented out their resentments about their marriage. Best was almost at his "best" as the husband who tries to make things work out. However, I felt he was throwing away some of his important lines because of his downstage position. I suggest he should try upstaging himself more.

Dwayne Campbell's sets in Metro have always impressed me as did his design in this play. Sean Ullman's costumes were appropriate, and the scene when the three sisters try out the different dresses of their deceased mother got laughs from the audience. I was bothered, though, with people coming in when the play resumed after intermission. I think there was a lack of communication between the house manager and the stage manager here. I also found the music a bit loud in the last scene of Zales, thus drowning out some of the important lines.

The play is indeed appropriate for this time of the year as November is the month of remembrance: All Souls' Day on November 2nd, then Remembrance Day on the 11th, and in the US, Thanksgiving later this month. This is a must see play, as it is not only enjoyable but also memorable.