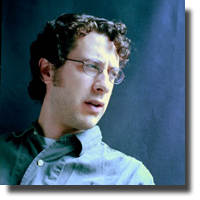 The stage is dark and void of any props or color with only one spotlight throughout the show. TJ Dawe appears on stage in a dark grey T-shirt and grey pants. All of this certainly sets the stage for a depressing journey.

Medicine is a one man show, a monologue of TJ Dawe’s life story which is rather average until he eventually takes us on his psychedelic trip with the Amazonian psychotropic plant medicine ayahuasca.  Dr. Gabor who has been experimenting with the drug, heads a group session into self analysis in which Dawe is one of the group members.

Dawe's first issue is that he hates groups. We sat in the middle of the theatre and could not hear 25% of his monologue. Perhaps people in the back row could only hear 50% of it. Dawe uses one spotlight that changes color when he goes from serious to some of his funny commentaries. That was the only lighting effect in the show.

After feigning one dry puking bout, we already have the picture of how the drug affected him. There was no reason for him to continue with several puking bouts. Dawe presented himself well through the first half but seemed more hesitant with his lines towards the end of his performance.

If you want to be entertained (which of course that is why we have theatre), this may not be for you. Dawe did have a few funny lines but I found most of the performance dull. I know what a few critics might say, but my view as an average patron was “disappointment”.