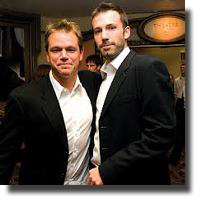 Ever wondered what superstars Matt Damon and Ben Affleck were like before they embarked on the award winning screenplay Good Will Hunting? Brenda Withers and Mindy Kaling’s (yes, that’s right, the one on the television show The Office) ludicrously satirical Matt & Ben is a comical peek at what these guys might have been like as naively optimist twenty-five year-olds. April Cameron (Ben) and Elina Chidley’s (Matt) version pushes the show even closer to théâtre de l'absurde.

Matt & Ben is the story of how two high school buddies come by the inspiration to write the screenplay for Good Will Hunting that focused on the relationship between Will Hunting (Damon) and his psychologist (Affleck had a much smaller part as Chuckie, a blue-collar worker). Cameron and Chidley probe the distinct anomalies in their subject’s personalities. Matt is more contained and takes his career very seriously, while Ben is spontaneous and unrestrained.

In one of the opening scenes, a script drops out of the sky – or more literally, thrown over the couch – with their names written on the first page. Matt immediately seizes the opportunity to play the lead role, but Ben is concerned with the moral implications (though quite willing to plagiarize J.D. Salinger’s Catcher in the Rye).

Matt & Ben is hardly a serious portrayal of the Hollywood actors. In fact the show gets its schtick from the gender transmogrification of generously proportioned female performers in the title roles. Its basic production criterion and 60+ minutes run time give it the ‘look and feel’ of a Fringe show.

Clifford Upham, an alumnus of the Capilano University theatre programme, maintained an appropriately slick pace, giving his actors a free hand in style and delivery. April Cameron and Elina Chidley turned in suitably quirky performances, giving the audience plenty to chuckle over without letting the show descend into buffoonery.