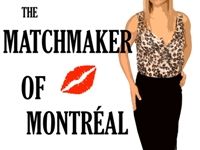 I could see that this play was inspired by the musical Hello, Dolly! where Dolly Levi, matchmaker, ends up being matched herself. Directed by Sarah Phillips and starring David Adams, Lisa Bunting, Robert Moloney, Kirsten Robek and Juno Ruddell, this play follows Elise Fortin (Kirsten Robek) as she leaves her middle-class life and engages renowned Montréal matchmaker Martha Boisvert (Lisa Bunting) to aid in her quest to become the richest woman in the world.

Veteran actor David Adams plays the Prime Minister of Canada as well as other roles (Usher, James the Butler). He acted well--good voice, good pace. I remember him well as Daddy Warbucks in Annie. Lisa Bunting stammered through many of her lines. I felt she wasn't focused. Robert Moloney was excellent. What a versatile actor! He played so many roles, but I liked him best as Juan Carlos. Kirsten Robek, whether it was on purpose, acted artificially. There was something phony about her acting. Whether Phillips directed her that way on purpose is hard to tell. And Juno Ruddell as Sylvana and Chantal Dumaurier wasn't bad at all.

I like the story line because it deals with the "ancient profession of matchmaking", in the words of the playwright. However, I felt that inspite of the wittiness in some of the dialogues, which got a few giggles from the audience, there was something lacking. Perhaps it was the timing of the punch lines that didn't work out too well. The playwright, who is also a novelist (The Nubian Princess), I believe, is still green to playwriting, but he does have potential. It would be interesting to see his other two plays, The Masks of Oscar Wilde and The Concierge of Vancouver produced.

The production aspects were quite good. I've always admired Itai Erdal's lighting designs. Christopher Gauthier's set, props and costume design were appropriate for this type of production, and the sound design was very good. I enjoyed the Brazilian guitar music before the play and during intermission. It probably was Steve Charles himself playing in one of his tours?

This is no Neil Simon play, but I like the idea that we do have Canadian playwrights writing on Canadian topics.