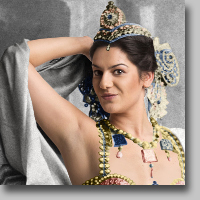 Performances in French with English subtitles

This 55-minute biopic presented in physical theatre format relates the story of this infamous alleged spy felled by a firing squad in WWI. Although I found the show interesting with dance movements, ballet-like sometimes, and other times, mimed in Marcel Marceau style, a pity, though, that I couldn't make out the surtitles in English, as the narrator in a voice-over told her story in French.

A pity also that there were only 7 people in last April 2's matinee performance. Perhaps if the narration were in English, a bigger crowd might have attended. Mata Hari was considered the mother of modern feminism who openly discussed her own sexual desires and played by her own rules, She inspired generations of women as a performer, givng rise to modern dance in Europe.