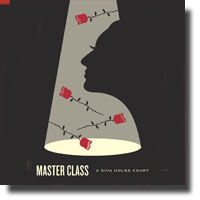 Living in Montreal in the late summer of 1977, I remember watching baseball on television which was abruptly interrupted with an announcement of the death of Maria Callas. It was just three days after the perhaps less sudden passing of another music giant, Leopold Stokowski. A few weeks later, we then lost popular music icon Bing Crosby. 35 years later, it’s Maria Callas, the much celebrated diva that looms largest in legend.

Not that one needs to be an opera buff to appreciate McNally’s play, nor is Master Class a musical in the strictest sense. As a matter of fact, Ms Chiarelli who portrays La Divina doesn’t sing a note. McNally’s play, while absorbing, doesn’t really have a narrative arc. Chiarelli takes down the fourth wall in speaking directly to the audience as if we were students in her “master class” (the closest most of us will ever get to attending a class at the Juilliard School of Music). It’s certainly a demanding role. Not only does it require a strong sense of the dramatic, but also a connate ability to deliver sarcasm without coming off as obnoxious and convincing Italian pronunciation – no problem here with Gina Chiarelli.

Callas certainly had a reputation of being the quintessential diva with directors and fellow artists (especially tenors), however, it’s not known if she carried this tenet into her classrooms. The playwright doesn’t allow fact to get in the way of indulgent characterisation. Lines like "Attention must be paid to every detail" and “We’re only known through our work” are oft repeated in the deliberate process of belittling students and patronising the accompanist.

McNally would also have us believe that the play’s central character is encumbered with far too much vanity to coach future stars of the operatic stage. Through her students’ inspired interpretations, she lapses into a trance-like reliving of past triumphant performances at La Scala and her stormy relationship with Aristotle Onassis who ultimately abandons her in favour of Jacqueline Kennedy.

It would be appropriate to mention praiseworthy roles by Frédérik Robert, Shannon Chan-Kent and in particular experienced soprano Melanie Krueger who delivers a fine rendering of Lady Macbeth’s ‘letter’ aria. While not real actors, they manage to hold their own on the same stage as one of the best.

What Master Class lacks in truthfulness, it more than makes up for in individual performance. Gina Chiarelli thoroughly deserved the standing ovation.

A final note: the show was made all the more enjoyable as a result of sitting on brand new comforatable seats.