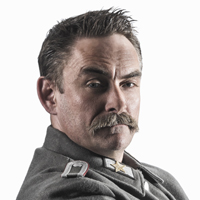 This thought-provoking production composed of a strong cast Tariq Leslie (Stalin), James Gill (Zhdanov), Chris Robson (Prokofiev) and Chris Lam (Shostakovich) will make you feel like you're in a roller coaster ride until its climactic finish.

It's the kind of play where satire collides with tragedy, a dark comedy where you can laugh as well as cry. In this play which takes place in an anteroom of the Kremlin in 1948 during the Soviet Musician's Union Conference in Moscow, Stalin is formulating his policy for the Arts in The Soviet Union and summons Shostakovich, and Prokofiev, the leading Russian composers of the day,to discuss, with the aid of his Cultural Minister, Zhdanov, their place as artists in Soviet society.

We assume from the offstart that the discussion will be conducted on Stalin's terms, but as the play progresses, what happens is far from predictable. The atmosphere is tense. Stalin summons the musicians to help him compose his own anthem that will be sung by 'thousands of voices'. We don't know if he is genuinely befriending them or playing them. At first, the composers are hesitant, but slowly in darkly comic fashion, the tables begin to turn, as the four men in a state of alcohol provide and enhance a creative 'masterpiece' until the surprising and shocking end.

This indeed is an actors' play, and if you have good thespians to play the different complex roles as I observed in this production, everything else will go smoothly. The pacing was just right and you could hear a pin drop as the audience on opening night listened intensely.

In an email interview, I asked Pownall a few questions:

EF: In your book Writing Masterclass, you mention that this was a satire, some sort of dark comedy. Could you elaborate? DP: I aimed the play at the idea music can be completely taken over by political needs and lose its freedom. The intention is to mock the totalitarian state within a realistic setting of human fear. EF: The reaction of the Vancouver audience last night was mixed. Some laughed while others took  The play seriously. Is this typical of audience reaction in other countries where this play was presented? DP: Audiences everywhere respond to the absurdity as comic but the realism maintains its power. The composers could die any time. EF: Any other insights you can share about this play? DP: Ed, after 36 years living with manifestations of Master Class I’m out of insights but only pleased if it still relates to the world we live in. I hope enough people enjoy the production to have made it worthwhile.

I read a British critic's comment that on a flight from Moscow, the award-winning British playwright and novelist sat next to an English diplomat who had been in Russia in 1948. He heard a rumour that Stalin offered to give Prokofiev a piano lesson. Apparently, Master Class grew out of that rumour, and this play has been for the past thirty years successfully produced in more than twenty countries.

One last note. This is Shostakovich's centenary year of his birth, and it's good timing that this play is showing here in Vancouver.