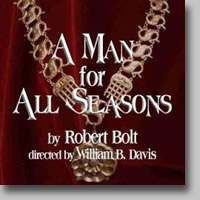 United Players
A Man for All Seasons by Robert Bolt

A Man for All Seasons tells the true story of Sir Thomas More the 16th-century Chancellor of England, who refused to endorse King Henry VIII's wish to divorce his wife Catherine of Aragon, who did not bear him a son. The Church of England was part of the Catholic Church and was bound by laws and directives given by the Holy See in Rome-- these were enforced by Sir Thomas More, the Lord High Chancellor.

In Robert Bolt's A Man for All Seasons, More is portrayed as the ultimate man of conscience. More remains true to himself and his beliefs while adapting to all circumstances and times, despite external pressure or influence. More represents "a man for all seasons." The play portrays More as a learned man of principle, envied by rivals such as Thomas Cromwell and loved by the common people and by his family.

More gives up everything and everyone for the principle of keeping his conscience clear. He does not waver on this idea of conscience. His family, including his beloved daughter( played convincingly by Angela Shaw) try hard to dissuade him and beg him to sign the Succession to the Crown Act 1534 which would allow the young King Henry VIII to divorce Queen Catherine of Aragon and marry Ann Boleyn who he hoped would give him a male heir.

The Catholic Church did not allow divorce and More the staunch Catholic refuses to ignore his conscience.This is the key point of the play.

More testifies before an inquiry committee and Norfolk his good friend, attempts to persuade him to sign the Succession to the Crown Act 1534.

Norfolk: Oh, confound all this. ... I'm not a scholar, as Master Cromwell never tires of pointing out, and frankly I don't know whether the marriage was lawful or not. But damn it, Thomas, look at those names. ... You know those men! Can't you do what I did, and come with us, for fellowship?

Riveting dialogue and passionate feelings keep one on edge and succeed in making the play intense and compelling. Davis, the director of the play acknowledges that A Man for All Seasons provides a historically accurate but selective picture of a man who, centuries after the events of Bolt's play would be canonized by the Roman Catholic Church for his martyrdom and his unfailing devotion to its teachings.

Bullen as More is magnificent in his performance. He shows great passion, love of family and loyalty to the King. He is able to convey the great difficulty and brilliant knowledge of a mind that was trying to follow the law and yet be true to himself. In the end, it was the conniving and perjury of others like Richard Rich (Chris Walters- was outstanding as he played two very different roles) and Thomas Cromwell (Gill was impressive in his role as the relentless and power-hungry adversary), that destroyed More.

Abel - as the Common Man/Cardinal Wolsey/Servant/ Boatman/ Jailor-- is outstandingly versatile in each role he plays. Begging for a coin as he plays most of his roles, he keeps to the theme of being the poor man in the company of the rich and affluent. He also shows as Bolt wanted to, the influence of the average man in history.

The clear and well-articulated arguments, the principles of conscience, the privileges of class and the necessity of Laws all play a central role in this performance. Brilliantly directed and artistically compelling it is well-worth seeing.