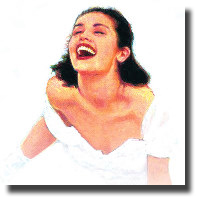 It’s hard to believe that it’s been forty years since Anni-Frid, Benny, Bjorn and Agnetha (ABBA) last recorded together. Yet, judging from the audience’s enthusiastic response to the opening performance last night of the current touring production of Mamma Mia, the foursome’s popularity has not appeared to have waned.

Sophie is about to get married and typical of most young women about to embark on such a journey, she would like to have her father give her away. Sophie’s personal enigma is that she doesn't know who her father is. But after sneaking a peek at mother’s back journal, she identifies three of her mother’s former suitors: Harry Bright, Bill Austin, and Sam Carmichael. Believing she would discover which, if any, might be her biological father when meeting them face-to-face, Sophie invites all three to her wedding. When all three men arrive on the day before the wedding - without Donna’s approval - the fun begins.

Erin Fish in the principle role of Donna and Yael Reich, who for this performance comes in to deputise for Kyra Belle Johnson as daughter Sophie, deserve special kudos. Florida native Reich in particular, did more than hold her own, performing well within her capability. She showed bold athleticism in the ensemble dance sequences and artistry in the nightmare scene that opened the second act with the tune “Under Attack.”

Laura Michelle Hughes as the foxy cougar Tanya and Sarah Smith as the pragmatic Rosie provide many light comic touches and steal nearly every scene with their over-the-top physical comedy. The male cast tend to get short shrift, but Chad W. Fornwalt who willingly takes on the only serious role of Sam, somehow manages to look earnest in his duets with Sophie (Knowing me, Knowing you) and Donna (The Winner Takes it all). Stephen Eckelmann, however, comes across as stiff in the essentially transparent role of Sophie’s fiancé Sky.

The show’s longevity has presented productions with a rather klutzy reversion. When the show first opened, it was set in the (1999) present time. The storyline is now locked in a virtual time warp, leaving subsequent audiences to theoretically transport themselves back a couple of decades.

Mamma Mia! works best when it doesn’t take itself seriously and is less successful when it attempts sentimentality. Fortunately, there are few scenes that are blatantly sentimental.

Looking around the Vancouver audience, it would seem that ABBA’s musical legacy has galvanized people both across cultures and across generations.