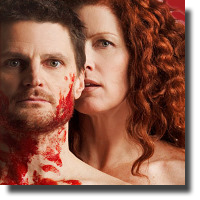 We have come to expect theatrical excellence from Bard on the Beach performances, and this year’s Macbeth is a play which far surpasses those expectations. Bob Frazer is riveting as the morally compromised Macbeth. His Scottish machismo, it is true, may occasionally appear less credible than Craig Erickson as Banquo or Ian Butcher’s menacing but manly Macduff. But Frazer makes his Macbeth as convincingly virile and vulnerable as the diabolical drive of Colleen Wheeler’s Lady Macbeth is intense and also incredibly human.

By the time she makes her surprising final appearance near the end of the play, the audience has come to feel that she is somehow as much of a victim as Lady Macduff or even King Duncan himself. That these unexpected sympathies emerge must be attributed as much to the complex dynamic relationship that the two principal actors manage so skilfully to portray as to Miles Potter’s consummate direction. Sympathy for Lady Macbeth? Could be a new Rolling Stones’ tune.

If this Scottish play is a prototype for psycho-dramatic theatre, then these two characters are demented exemplars for the extremes to which neuroses can take you. When the Macbeths first appear on stage together, an icy power struggle freezes their rapport. Then, later when Lady Macbeth questions her husband’s manliness, apparently goading him into killing Duncan, they seem swept up in a strong sense of sensuality. Their physical interaction is a consummation of sorts that almost makes their previous frigidity seem tantric. The theatrical sense of timing here and throughout is as subtle and powerful as the architecture of the set is symbolic.

Two doors on either side of the stage arch to a peak and these patterns are inverted as the set design ascends to the ceiling, giving a credible hourglass shape that accentuates the sense of time underlying one of the play’s central themes. Kevin McAllister is to be commended for this innovative approach to set design. Thus, the creeping “petty pace from day to day to the last syllable of recorded time” takes on much more than a merely memorable line in this play.

I have commented on the timing already, and I would like to applaud the superb manner in which every voluble beat and rhythm, every cadenced elocution, and every seemingly careless gesture in this production is timed and executed with careful precision to communicate how much of a catalyst and a crucible time can be for those who yet live while its sands are still in motion. Time truly will tell, and sometimes timing tells all.

Between the thought and the deed, there lies the shadow. In this shadowy realm, the witches and their evil spirits hover. Thanks in part to Mira Gottlier’s costumes, the witches and their evil spirits seem as much a part of the set itself as gullibility seems a part of Duncan. Director Miles Potter seems to be making the statement that evil appears when and where you least expect it. This tactic is as original and expressive as Shakespeare’s own ironic juxtaposition of having Macbeth suddenly arrive just as Duncan says of Cawdor, “There’s no art to find the mind’s construction in the face. He was a gentleman on whom I built an absolute trust.”

Bernard Cuffling brings a kind of regal benign innocence to his role as Duncan, which goes a long way to lending a greater air of authenticity to Macbeth’s later line about how “this Duncan hath borne his faculties so meek, hath been so clear in his great office that his virtues will plead like angels, trumpet-tongued, against the deep damnation of his taking off.” All are to be lauded.

Much more could be said. About how effectively Miles Potter juxtaposes innocence, through Fleance’s appearance, with the carnality of the Macbeths’ sensual consummation of their evil plan. Or about the excellent acting of John Murphy as the Porter. All this and more. To see it, is to appreciate its richness.