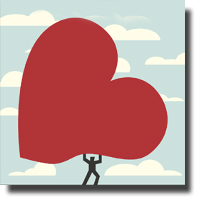 Arts Club Theatre Company in association with Neworld Theatre
How has my Love Affected You? by Marcus Youssef, original music by Veda Hille

How Has My Love Affected You? is a loosely scripted, subjective bio-doc by Marcus Youssef. It sets out to examine the real-life relationship with his seemingly needy mother Roleene, but along the way turns into an eighty-minute public therapy session.

Quickly glancing over at the stage on first entering the cozy Revue Stage theatre space and seeing piles of bankers boxes, some stacked under a table, some stacked on top, one immediately had the feeling that Mr. Youssef was about to offer the audience something very different.

The inquiring title comes from one of Roleene’s numerous letters to no-one in particular, rather like the standard question from typical councillors: “And how does that make you feel?” We hear Youssef repeat the title phrase throughout the show, usually with irony, perhaps once out of perplexity, though never contemptuously.

The play is a father and son double-hander. Youssef Sr. is the storyteller and dominant presence on stage speaking directly to the audience, sometimes even to individual members of the audience in an off-the-cuff conversational style that actually works well for this type of theatre. Zak Youssef delivers Veda Hille’s soundtrack with lyrics mostly taken straight from his grandmother’s texts. Once in a while Youssef Jr. assumes the role of his father, while Dad takes on the persona of Roleene.

Youssef Sr. begins his mother’s odyssey in the present, where she is resident in a Vancouver nursing home afflicted with Alzheimer's at only seventy-three. He equates nursing homes to day care as he presents a humourous introduction to a few of his mother’s fellow “in-mates” who would also prefer to be anywhere else.

Roleene hails from Bakersfield, California and met Marcus’s father, the son of Middle Eastern immigrants, while attending University of California, Berkeley. She was never someone that enjoyed living in what Marcus calls “Mad Men culture” (from the retro TV show). When their turbulent marriage ended, Marcus, who was then only in his mid-teens, embarked unwillingly into a complicated and confusing relationship with his mother, who by this time had become evermore emotionally dependant.

The storyteller shows his discomposure only once, when revealing the existence of a sister (Patricia) who was given up for adoption before he was born.

By the story’s end we see Roleene as a mercurial, high spirited woman who once had a zest to live life on her own terms. Some may see How Has My Love Affected You? as indulgent, others, including this reviewer see it as courageous.