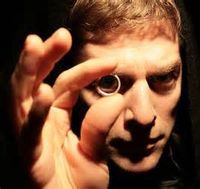 Waterfront Theatre
One Man Lord of the Rings by Charles Ross

In this day and age, shows no longer regard content as important as the medium itself. That was what Marshall McLuhan, professor of Media at the University of Toronto predicted more than 40 years ago. And we see this all over the Fringe nowadays. Just as you had "trekies", the avid fanatic fans of Star Trek, today, Lord of the Rings has its followers, perhaps to be later dubbed the "ringies".

Opening night was the night of these creatures who came to almost sell out the Waterfront Theatre. I was an observer more so of the audience who would laugh, giggle and cheer at the every move of this ridiculous actor whom I didn't find funny at all. But the word "rave" applies. Either this fanatic audience watched after having memorized the many sequels of this movie and understood the characters played by Ross, or most probably just mesmerized by his sound effects, impressionist moves and asides which took this boring one-man show to more than 75 minutes of moronic showmanship I had to endure.

But each to his way of looking at things. These post-Mcluhan audiences are here to stay. They now form the audience that participates. Broken is the fourth wall; in fact, theatregoers now are encouraged to dress up the part so as to be part and parcel of a show. I still maintain that theatre belongs on stage and we are but onlookers, with that fourth wall dividing audience and actors.