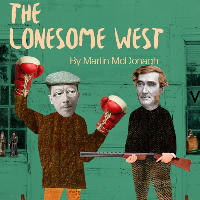 The Lonesome West’s action begins following a funeral in a small Irish town, which very coincidentally is the same beginning as the last play I attended at Pacific Theatre (Outside Mullingar by John Patrick Shanley). However, unlike Shanley’s play, Martin McDonagh’s writing is not for the easily offended. Be prepared for racial slurs, dark themes, and coarse language (expect to hear “feck!” peppered liberally throughout).

Based upon the murderous and suicidal goings-on in the small Western Ireland town of Leenane, and part of McDonagh’s trilogy of plays set in this troubling region, The Lonesome West tells the story of two bickering sociopathic brothers, who the local townsfolk whimsically refer to as simply, “very odd.”

The fact is, the Connor brothers have homicidal tempers, are selfish, greedy, and relentlessly and unapologetically racist, sexist, and sacrilegious. Unapologetically, that is, until an event forces them to reflect upon their actions and attempt to change.

Kenton Klassen and John Voth play brothers Coleman and Valene well. Their thick Irish accents are on point, and with McDonagh’s quick-paced dialogue littered with slang and racial slurs, not to mention the physical demands of a brawl in nearly every other scene, Klassen and Voth are extremely hilarious and very convincing. Sebastien Archibald plays Father Welsh, who is the hapless and ineffectual mediator to the brothers. Suffering constant crises of faith coupled with a bad drinking problem, Archibald conveys Father Welsh’s spiritual futility and depression through many face rubbings and deep sighs.

The fourth character is Girleen played by Paige Louter, a cheeky local girl who delivers the brothers their alcohol. Louter as Girleen brings heartfulness to the play, though she hides her integrity well behind a tough and rowdy exterior. In the end, she is the messenger-come-lynchpin who brings everyone’s fates to culmination. She may be the only sentimental part to this play, and without her the story would likely be too disheartening. Indeed, Girleen offers the most comforting words of the play: “When you’re sad and lonely, you’re still better off than those lost in the ground.” At least, that’s about as comforting as this story gets. Still, this production pulls off a lot of good laughs in spite of almost certainly going to hell in a hand-basket for laughing so.