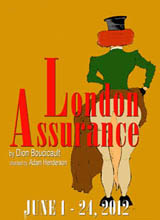 London Assurance is this year’s United Players finale, and its robust humour is one small reason it is so rich and rewarding a play.  It was late in a long run that has seen several sell-out houses when we finally made it out to the Jericho Arts Centre for Adam Henderson’s latest directorial presentation.  The packed house was full of laughter and applause for what was a truly excellent performance.

I was not sure what to expect from a play with a cast that included such portentous names as Lady Gay Spanker (Cara McDowell) and Sir Harcourt Courtly (Keith Martin Gordey).  Nor had I ever seen a play written by Dion Boucicault, a playwright whose work in English comedy is as influential as it is intensely funny.  This performance left me wanting to see more of Mr. Boucicault’s plays.

As the play opens in the city of London, it becomes apparent that Sir Harcourt’s butler Cool (Brian Hinson) is a reluctantly mendacious mediator betwixt his master and his dissolute son Charles (Mitch Hookey).  I suspected a day of reckoning.  But things become quite a bit more complicated than this simple deception when the son’s friend Richard Dazzle (Patrick Spencer) gets involved.

Soon everyone is invited for a trip to the country estate of Max Harkaway (Don Glossop) at Gloucestershire, and both father and son end up in an amusing love triangle with Max’s daughter Grace (Emma Middleton) who is subject to what turns out to be a rather intriguing legal clause stipulating how her marriage will affect her inheritance.  Needless to say, things run contrary to expectations with hilarious consequences.

To complicate things even more, Sir Harcourt Courtly finds himself smitten with Lady Gay Spanker, whose husband is boorishly inarticulate until he’s had his medicine (or an after-dinner taste of bourbon with the boys).  Adolphus Spanker (John Harris) soon finds himself faced with the unlikely dilemma of having either to enlist the all-too-willing assistance of the litigious Mark Meddle (Matt Reznick) who frantically urges him to prosecute for adultery, or to follow the advice of Richard Dazzle and challenge Sir Harcourt to a duel.  You’ll be amused to see which course of action he takes and what happens next.

The city folk make plenty of jokes about country life, and there is a vast storehouse of imagery on horses and fox-hunting bandied about by the rural types, as well.  But another of the many enjoyable features of this play is the frequent use of asides.  These brief but memorable soliloquies are delivered as ironic rejoinders to the audience and are a hilarious means of undercutting or putting into perspective whatever action or dialogue is taking place at the time.  Inventive and incendiary, these ‘thought bubbles’ are handled deftly and effectively by the cast.

Keith Gordey does an admirable job of cutting the fine figure of his gentlemanly cad with a debonair and dramatic flourish that puts the g-for-guffaw in gusto!  Mitch Hookey plays the wastrel with a rare dissolution, energetically and impertinently.  Patrick Spencer is importunity personified, brash but with attitude.  Emma Middleton plays her role with a pert elegance that proves refined sensibility is as at home in the country as it is in the city.  Cara McDowell obviously has too much fun with her part as Gay Spanker, and she brings a delicious amount of frivolity and joie de vive to the stage.

John R. Taylor designed a cleverly constructed set on a large round rotating stage with an elegant urban backdrop featuring the sophisticated living quarters of Sir Harcourt Courtly and his genteel town life lifestyle on one half, and the rustic country estate of Max Harkaway with his fox-hunting noblility on the other half.  The audience is entertained with music, song and dance while the scenes are being seamlessly shifted between London and Gloucestershire.

Finally, I must commend Mandy Brost and Morgan Ard for their impeccable costume design.  Thanks to them, these actors are garbed with a style that enhances each of their character’s sense of place so that form is wedded well to the function of each of their several parts.  It is a delight to see the way this performance came together so well, and a credit to Adam Henderson’s directorial expertise.

You might just have enough time to catch the final performances of this show-stopper of a season-closer.  If you do, remember you have my assurance—thanks to an excellent cast and crew, you’re sure to enjoy London Assurance.