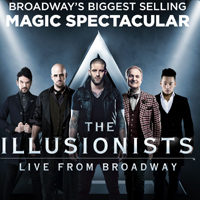 Broadway Across Canada
The Illusionists

Amazing show! I've always liked magic shows. In fact, I still remember when I was a child, I volunteered to come onstage for an egg trick. I still remember the magician trying to get an egg he put in my mouth and I wasn't giving in. He finally took it out and planted it somewhere.

In this new millenium, with all the high tech, Vegas-style entertainment, cameras can now get close ups of the tricks, but still, the hand is faster than the eye, and we're always caught mesmerized, scratching our heads asking, "How did he do it?" Take the Korean An Ha Lim, the card manipulator...where do all those cards come from? Or how about the Scottish mentalist, Colin Cloud, also known as the deductionist--how could he know what audience members were thinking? A cynic or skeptic would most probably say, "The volunteers were planted."

Now in the case of Jonathan Goodwin, the daredevil...now, this was the scariest part of the show...the only illusionist who didn't do magic tricks...pure skill! In one act, he had 60 seconds to get out of a straight jacket or if not, he'd fall head first into bear traps below. Another scary act he did was put a live scorpion in his mouth. Now a skeptic would probably say, "It's a mechanized rubber scorpion...it's not the real thing." Well, folks, you tell me. Another daring act was shooting a balloon from his assistant's head. Boy, was that assistant relieved the arrow hit the target!

Darcy Oake, the Grand Illusionist, the Canadian in the group (read interview below), did fascinating magic tricks, like putting a coin through two glasses, and other illusory tricks. Adam Trent, the futurist, did something that delighted the audience, pouring coca cola from a crumpled, empty coke can, and other funny stuff, like running around the orchestra area with a funnel-looking gadget on his head, asking the audience to throw in their garbage in it. Then he sorts out the garbage and voila! Another neat trick. You have to go and see the show to believe what he did.

This was an entertaining two-hour spectacle, showcasing the talents of five of the best Illusionists in the world. Be sure you get your tickets before they sell out.

An Interview with illusionist Darcy Oake

The Broadway Across CanadaTM touring production of The Illusionists will be coming to Vancouver in the new year (January 15 - 20, 2019). It promises to be a mind-blowing spectacular that showcases the talents of five individual Illusionists at the Queen Elizabeth Theatre. One of them is Canadian Darcy Oake, who is not just an illusionist, but also an escapologist. Darcy will be sharing the stage with: futurist Adam Trent, daredevil Jonathan Goodwin, Colin Cloud a mentalist and An Ha Lim, who specializes in card manipulation.

Darcy spoke to me by telephone this week from New York City where he has been performing The Illusionists on Broadway, prior to taking the show on its North American tour. Darcy has been to Vancouver many times before and has even presented his solo show at the Queen Elizabeth Theatre.

Darcy has been ‘working his magic’ since he was a teenager, but he really got a career breakthrough in 2014, when made an appearance on ITV’s Britain’s Got Talent before millions of viewers. He didn’t win, but finishing fifth for a young magician was considered a major accomplishment.

My first question to the master Illusionist was “What is the best aspect of being a magician and is there stress attached to a performance?” “Seeing the audience reaction and knowing that you are responsible for creating something mystifying” he responded. “There is often stress in performing and magic especially so - just about anything can go wrong.”

Stage magic has seen a renaissance since the turn of the millennium. I asked Darcy if he thought this was at least partly due to the Now You See Me film series that featured Jesse Eisenberg. “I’ve seen the film and it has probably helped, but magic has become cool again for a number of reasons.” He continued with his own theory “David Copperfield has done around twenty television specials over the last decade and artists have invested a lot of time and expense in creating quality performances.”

When I asked if technology was making illusions easier that weren't possible in the past, he had no hesitation in countering. “No, there is more to it than that. I find that I have to keep a step ahead; finding ways to improve.” “I rely on attention to the details and getting all the nuances correct.”

I pondered over asking the next question, but I was curious. “Have you ever had an illusion go wrong in front of an audience?” “It happens! I usually find a way of working around it before the audience realizes anything has gone wrong” he answered amusingly.

Performing magic seems to be demanding, so I asked Darcy, who is still only around thirty how important is maintaining physical and mental sharpness. “Fitness is important. It’s a matter of understanding the elements and of course, preparedness.” “I have a regime for keeping the vocal chords loose before a show.”

I ended our conversation with what I thought might be a surprise. I mentioned that I had met his father, sportscaster Scott Oake on Cypress Mountain when he covered the downhill skiing competitions at the Vancouver Olympics in 2010. “Oh yeah, my dad has worked at every Winter Olympics since Calgary ‘88” he replied, completely unfazed.

Tickets for The Illusionists are available for the eight shows, including two matinnes. For information on showtimes and ticket prices GOTO: vancouver.broadway.com/shows/illusionists/