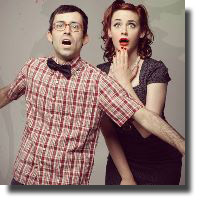 What happens when you get a salmagundi of madcap satire and a romantic comedy involving a couple of outsiders, remove the Hollywood happy ending, and then give it a B-movie schlocky title? A Fighting Chance mounting of A Little Shop of Horrors – is what happens.

When hapless hero Seymour Krelborn (Kerry O’Donovan) comes into possession of a “strange and interesting plant,” which he delights in naming Audrey II in honour of his winsome co-worker Audrey, he manages to turn his employer’s run-down, Skid Row flower shop into a thriving emporium. Initially, his plant, which mysteriously appeared following a solar eclipse, wasn’t doing too well. He discovers this exotic plant, whose species cannot be identified, needs blood – human blood – and plenty of it to thrive.

Kerry O’Donovan is charmingly nebbish as the very meek and extremely mild Seymour, though to his credit, never comes across as too wimpy. But even he is upstaged by the carnivorous plant Audrey II who surely steals the show from everybody. Nick Fontaine, working in concert with puppet manipulator John Lee, is pretty convincing as the querulous voice that gets more belligerent with each increment in size of the demanding, vampiric Audrey II. Ria Manansala, Nicole Stevens, Veronika Sztopa, wittily named Chiffon, Crystal and Ronette essentially function as a close-harmony, Spector-styled, girl group set the scene and provide a musical narrative throughout the show. Greg Delmage is positively camp as Orin Scrivello, D.D.S. along with his several other quirky roles.

Much like Seymour, I was drawn to Audrey, the sexy ill-fated heroine with serious self-esteem issues as played by Melissa Clark. She barely has the chops to get through her showpiece solo Somewhere That's Green, but she does reveal genuine comic timing. I even thought that Suddenly Seymour, her heart-warming duet with O’Donovan, worked well with unexceptional voices. It came across as more natural and poignant.

Alan Menken’s catchy sixties style tunes that get into your head and stay there are key to the show's implicit charm. But the simple storyline with its exaggerated characters allows audiences the fun of cheering the heroes and booing the villains.