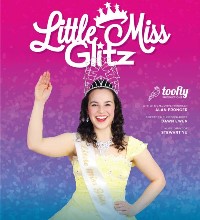 Little Miss Glitz is a musical parody about the ridiculousness of child beauty pageants in America. Where parents have an overwhelming desire for their child's success, often times much to their disappointment.

In what best can be described as part "Little Miss Sunshine" and part TLC's "Toddlers and Tiaras", this story centres around 5 prepubescent beauty queen wannabes, their show moms, 1 fabulous pageant coach and 1 dad trying to keep it altogether. Paige Fraiser plays awkward, 7 year old bespectacled Isabella Conner, who's entire goal is to be a pageant superstar along with her somewhat clueless dad (played well by Ben Bilodoe) who's trying to stress the importance that being herself is enough, but also trying to keep her happy.

"Issy's" competition is fierce though. Tiana Jung plays the adorably fierce and somewhat orange spray tanned "Jalene Darlene" who, along with her pageant coach "Stephan St Claire" (Stewart Yu) hopes to knock out the competition any way that they can. "Jaylene's" show mother "Franny" (Jenn Suratos) acts like more of a servant trailing along, spouting off moments of reality amidst all the pageant fantasy in a grounded and honest performance. She also has one of the strongest voices of the night.

Meagan Hommy plays the sugar crazed "Mackenzie Ziploc " with reckless abandonment and Rebecca Piplica plays her boozy, delusional and very Stepford wife acting Stepmother . Rose McNeil plays "Hilarity butterfly" who is trying desperately to shed her trailer trash past while her pint size queen wannabe is played by Grace Newson ,who shows us that winning isnt everything, it's the only thing.

It's difficult to pick just one favourite show mom and child but coming close is Vanessa Coley Donohue as "Carole Wood" and her diminutive and unhappy show child "Sparkle America" (played by Kayla Heybloom) who for 90 percent of the show just wants to go home and play with her friends.

Coley Donohue play the parts with such self indulgence and specificity you just love to hate her and Heybloom brings forth a honest heart retching performance that must live in the hearts of any girl any child yearning for their childhood. Alan Pronger writes a tongue in cheek script that's full of humour and heart along with "pre recorded interview style videos" that act as scene transitions and really give that reality show feel.

The entire company's commitment to characterization is well worth the ticket price alone. The musical song choices are a lot of fun and vocally sit well with the cast however the sound often overpowers the singers and sometimes lyrics are lost.

Additional notable standouts include Stewart Yu for his Ru Paul- esque portrayal of "Stefan St claire" and Matthew Fedorowitz as the energetic and slightly creepy pageant host Peter Phyle. The show had me smiling from the moment I sat down without the need for vaseline on the teeth. Get your glitz on and see Little Miss Glitz.