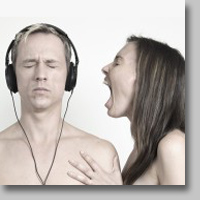 The Alley Theatre
Little One by Hannah Moscovitch

Little One was staged as if it was masquerading as an interrogation scene in a Film Noir. Aaron and Claire are illuminated by a cone shaped light, darkness surrounds them. They work with few props, a chair, a rug, a box and a tape cassette. As the narration of their story unfolds, the symbolism of the set is apparent.

Aaron and Claire are both victims. Claire of her early childhood experience and Aaron of the childhood he experiences due to his sister’s psychological problems. They are both trapped in a family dynamic from which they cannot escape.

The neighbours next door are also trapped in a dynamic of human suffering brought on by the individual limitations of each. Little One explores the twisted aberrations of “love” through the eyes of two children.

It is a disturbing play that deals with subject matter that explores the dark side of humanity. The writer does bring humour into the dialogue but against a background of such suffering it is difficult to laugh. The actors, Aaron (Daniel Arnold) and Claire (Marisa Smith) are convincing in their roles. Through their dialogue they create images of parents, neighbours, the street they live on and the cat painting, as it were, images on the darkness that surrounds the cone of light that they work in.

Hannah Moscovitch asks questions about the choices individuals make and explores the impact those choices have on those who are affected by them.  Little One, a hard hitting play with many layers to stimulate critical thought.