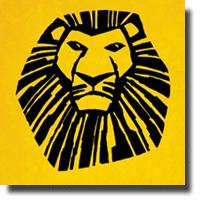 Disney's The Lion King
plus an interview with cast member Patrick R. Brown

Since The Lion King opened on Broadway eighteen years ago, hardly anyone who has seen it has failed to be impressed by this spectacular onstage production. Its popularity with audiences, both young and mature, is easy to fathom and is certainly well deserved. After all, the show is visually and aurally stunning and obviously resonates with people who are from, have visited, or even have a romantic perception of Africa.

While The Lion King is unabashedly Disney, the story at its simplest is a charming coming-of-age tale of a lion cub named SImba, who, it is assumed will eventually succeed his beloved father Mufasa as king of Pridelands, a region populated by all the animals of the African savannah. Of course, every good story, especially a Disney story, has to have an evil villain. Mufasa’s brother Scar fills the bill perfectly. As Simba’s jealous uncle, Scar’s nurturing skills leave much to be desired. His belief is that the future leader of the animal kingdom is his rightful place – not Simba’s

The show opens, with the entire cast of flocks and herds making their way to the stage from the aisles of the Queen Elizabeth Theatre. Looking over your shoulder to see a seven-foot tall elephant brushing by you on the way to the stage is pretty imposing. When the stage is finally packed with performers, they unite in singing the show's opening song, "The Circle of Life."

The show also carries an Eco message. Nia Holloway’s (in the role of white lioness Nala) show-stopping rendition of “Shadowlands” in the second act expresses what happens when “The river's dry, the ground has broken.”

Not all the songs have such a serious tone. Audience favorites Timon the meerkat played by Nick Cordileone and Pumbaa the warthog played by Ben Lipitz perform “Hakuna Matata” (hey, no problem) as they bring about Simba’s emotional rescue. Who would suppose that a savvy meerkat and a flatulent warthog could be best buddies?

Even those who haven’t yet seen The Lion King on stage (and even managed to miss the movie version) will have listened to Elton John and Tim Rice’s iconic tunes on the radio. But one of the songs heard that wasn’t written for the show and isn’t even listed in the program is “The Lion Sleeps Tonight.” Written back in the 1920s, it incorporates a call-response vocal pattern.

Budding actors Mikari Tarpley and Tré Jones who play the younger Nala and younger Simba respectively performed as veterans despite their youth. Understudy Farah Lopez seamlessly took over the role of mystic baboon Rafiki in act two from regular Tshidi Manye. Patrick R. Brown almost steals the show with his delightfully camp performance as Scar (but why the very British accent?).

The production qualities of The Lion King have advanced beyond the version I saw at this theatre five years ago. The show more than ever evokes the sounds and colours of Africa.

This month (June 18 – July 12), Disney’s The Lion King touring production rolls into town for a four-week run at the Queen Elizabeth Theatre. For those who missed it when it played in Vancouver five years ago, there will be thirty-one opportunities to catch this Tony-award-winning show.

Audiences lucky enough to get tickets will get to see some of the most memorable characters Disney has ever put on a stage like: Simba, Rafiki, Zazu, Mufasa and of course, the devious Scar. As is typical with Disney villains, Scar is a little over the top. While children may hiss and boo, adults will have as much fun watching Scar’s duplicitous antics as Patrick R. Brown has playing him.

Patrick is a Canadian stage actor who has featured in roles as diverse as Cleopatra’s fixer (Apollodorus), an animated clock (Cogsworth) and a transvestite (Frank-N-Furter). I spoke to the veteran performer by telephone earlier this week as he was travelling on the Amtrak train to Philadelphia. He told me how much he relished playing characters that are on the fringe of normalcy.”You might be surprised how close Frank-N-Furter’s character is to Scar” he informed me with tongue in cheek.

When asked how he was enjoying being part of the Lion King tour production, he seemed to get a genuine buzz from touring as opposed to what he termed “a sit-down” production. “I enjoy the travelling and discovering cities I’ve never been to before. The cast and crew is a large dysfunctional family that while they may have disparate personalities, always come together and support each other.”

Although being a classically trained pianist, Patrick freely admits to never attending formal drama classes or musical theatre college. He is very much old school in terms of his training, serving an apprenticeship while learning from journeyman actors. “My first job on stage was turning pages for my mother who was a piano player with a Gilbert & Sullivan opera company” he revealed. “Later, I had the good fortune to work with Christopher Newton, the artistic director of the Shaw Festival“ (Christopher Newton was artistic director of Vancouver Playhouse prior to his engagement to the Shaw Festival).

He was reluctant to discuss his accomplishments, but when pressed he listed “performing with the Broadway production of The Lion King in New York City, working at the Shaw Festival under Christopher Newton and doing ‘Improv’ in a Calgary Theatre company at the beginning of my career.”

Patrick has a proclivity for portraying ‘outsiders’ similar to the malevolent lion he plays in The Lion King, so I just had to ask if there was any particular role in musical theatre he would want to play. His response was hardly a big surprise – “Oh, definitely the MC from Cabaret” (the master of ceremonies of questionable gender at the burlesque Kit Kat Klub).

Patrick Brown doesn’t worry about the future. He only has vague plans when The Lion King winds up its current tour. “I’ll take a break and head back to my home in Niagara-on-the-Lake, perhaps even find work with the Shaw Festival.”