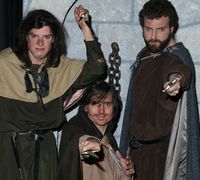 Written by James Goldman and directed by Dale  Kelly, this is the Greater Vancouver Zone entry in the upcoming annual TheatreBC drama festival, Mainstage 2012, in Kamloops. The play will be presented on July 6 at 12pm at the Sagebrush Theatre there.  This  award-winning production did a one-night encore last July 3rd to raise funds to help the Club with the significant expense of sending the show to Kamloops to represent the region.

Although it was panned by the Peace Arch News when it first opened last March, I felt the actors did a great job playing their parts. When you've done a number of performances after opening night, things get better and last night was like the final dress rehearsal before the big day this Friday.

Other historical characters are Philip II,  the young King of France (David Quast), and his sister Alais Capet (Elyse Maloway), both of whom were involved in an era, the 12th century, when English kings still swore loyalty to the French crown.

The only character that bothered me in this show was Philip II. The July 3rd audience snickered at the way he looked. There was something artificial in the way he dressed. He was portrayed as a homosexual in love with Richard the Lionheart. There should have been more gayishness in his portrayal.

This 1966 play became famous when it was made into a film in1968 starring Katherine Hepburn and Peter O’Toole. The play is all about a family reunion at Christmas in Henry’s castle at Chinon, in the Anjou region, in 1183, with he royal family discussing a basic question: Who will succeed the aging, but still vital, Henry and further his dream of an independent English monarchy?

I wish the cast and crew all the best, and hopefully, they'll come up with the laurels.