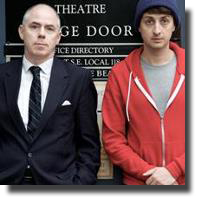 With the second of David Mamet’s plays to be presented to Vancouver theatre-goers this summer, the playwright might be wondering about what has caused his increased popularity in this city. The Theatre Co-op Theatre Co-op (I don’t know why the name is repeated!) mounting of Mamet’s lesser known A Life in the Theatre lacks the temerarious machismo and menace of Glengarry, Glen Ross, though it does incorporate a similar “changing-of-the-guard” theme.

Performed in the rarely used Playhouse Recital Hall in the basement directly below the Vancouver Playhouse Theatre, the show is a model of economic production. Temporary seating is arranged facing the exit doors in the south-east corner of the hall. Scenographer Ilena Lee Cramer has the task of turning this rehearsal room into a viable theatre space – who, by and large, does an admirable job. Aside from the tiny stage area that the audience has to turn its collective gaze to the left to see; there is a raised wooden platform set up as an open dressing room roughly twenty feet away.

Theatre Co-op(x2) have enlisted two recent recipients of Jesse Richardson awards to take on the companion roles of Robert and John: David Bloom for his collaborated direction of Palace of the End, Ryan Beil for his performance in the title role of Billy Bishop Goes to War.

Robert is the ultimate ‘blow-hard’ mentor, constantly harping on the value of tradition; John is his ambitious young protégé, forever willing to learn the craft and prepared to tolerate the older thespian’s quirks to mine his theatrical savvy. Mamet characterizes a progressive dynamic of their relationship. In the early scenes, there is an apparent mutual admiration which gradually gives way to reciprocal resentment. The actors, who also share directing credit, are well matched, each playing off the other’s strengths. Beil, who brings some of the droll humour associated with his work in the A&W commercials, is an understated foil to Bloom’s deliberately extravagant verbosity.

The pair are on stage together for almost the entire 75 minutes of the play’s running time, with the action split evenly between ‘backstage’ and ‘on-the-boards.’ Half a dozen guest directors join forces to shepherd the actors through the bits of faux theatre, where we see Robert and John’s personal life merging with their stage life.

Theatre Co-op's version of A Life in the Theatre is compelling and perspicacious, illuminating the play's lighter and darker moments.