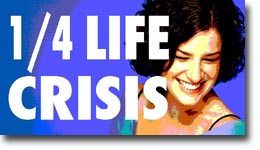 The musical prelude to this play, provided by Roots Folk-Rock singer-songwriter Lindsey May— including such personal hits as “Shimmer,” “Nashville,” “Hang Around,” and “Spinning 45s”—was a lot more comfortable and cozy than the play itself. Ms. May has a summery, country feel to her voice and music, and the mandolin was a nice surprise.

Alison Lynne Ward makes audiences laugh with her ¼ Life Crisis. There are awkward moments choreographed with more than a mild level of anxiety, as her protagonist goes through the mental contortions that arise from failed plans gone the way of the world, ten times awry and wrecked never to be salvaged.

Whether she is revising her planned parenthood, turning away from yet another lover, envying a rival actress whose career seems far superior to her own, or having to move in yet again with her parents, Ms. Ward pours pathos, personal vitriol and an edge of aggravated animosity into her own personal angst-ridden journey through her ½ Life Crisis.

The set is minimalist. The script is acerbic, expressive and provocative. Ms. Ward starts off with a remembered conversation: her high school counselor is getting her to make a personal list planning out her future. There are great expectations, downplayed of course, and as the play proceeds with failure after failure, the laws of diminishing returns take their toll on our protagonist.

Suddenly, near the end, there is mention made that life with no expectations has yielded big disappointments, because the world has failed to meet the expectations she did not have. Ironic departures such as this leave one wondering about the non sequiturs that have gone before.

Apart from the kick-flail defense against the ostrich that appears in a dream sequence that seems faintly reminiscent of a Woody Allan vignette, much of what Ms. Ward passes off as ‘crisis’ is petty pathos and drama queen histrionics.

Still, it is controversial fodder for the grist mill, and it makes one consider the world our youth will inherit, or the personal grief the Ms. Wards and other aspiring actresses of the world go through in their journey of discovery while en route to being ‘discovered’.