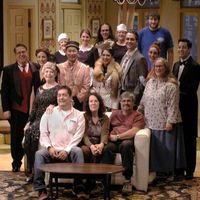 Metro Theatre
Lend Me A Tenor by Ken Ludwig

And as usual, what wonderful scene design and light effects by Les Erskine. Metro is known for having exquisite sets, and I marvel at how creative the production team is. Costumes by Zoe Watson were pristine.

The pacing of the play was perfect, and you really need a fast pace for comedies like this. The audience was giggling from beginning till the end as the actors delivered their double entendre lines and entered/exited through doors with perfect timing. Hysteria is perhaps the word to use for this comedy of mistaken identities.

Everytime I come and see a Metro production, the plays get better. Morrison chose the actors well. I was impressed by Montgrand and Reimer with their Italian accents and the way they exchanged words, typically Italian, gestures, passion and expressions. Dotto was excellent as the hysterical empresario, and Mooney as a comic actor is always impressive, although his singing isn't very good (which, I believe, was intentional).

Stewart as the passionate soprano exuded her sexuality quite glowingly; veteran actress Dearden played Julia remarkably well; Grubaugh was wonderful as the tenor's fan finally hearing bells when she kisses her true love, Max; and last but not least, Dos Remedios as the bothersome bellhop was funny.

Kudos to cast and crew for another successful mise-en-scene!