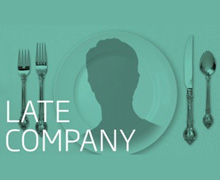 Damn good actors--Daniel Doheny, Michael Kopsa, Gerry Mackay, Kerry Sandomirsky and Katharine Venour. And hats off to Katrina Dunn for a fine production. The intimacy of the Cultch Studio gave everyone a sense of intensity because of the closeness of the actors to the audience. Accolades to Set Designer Pam Johnson for a magnificent set and kudos to the other members of the production staff: Costume Design by Amy McDougall, Lighting Design by Adrian Muir, and Sound Design by Scott Zechner. We felt like we were right there feeling the raw emotions oozing out of these actors.

But indeed, this was a darned good play by young Canadian playwright Jordan Tannahill, only 26, who just garnered this year's Governor General Award for Drama. His play reminded me of Edward Albee's Who's Afraid of Virginia Woolf? where there is bitterness and raw dialogues exchanged among the characters. Anger, sorrow, a mix of all kinds of raw emotions are expressed vividly by these brilliant actors. There were moments when actors emoted sadness and tears, and I could see audience members empathizing, wiping tears from their eyes. As they say, if you have a good play and good actors, it's a win-win situation.

The story is about two couples and a teenage son of one of the couples who sit down to dinner to find closure for the death of the other couple's son. But then things get heated up and in the end, something unexpected happens which we the audience never expected. This is a must-see play, and it closes in four days. You won't be disappointed.