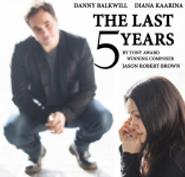 Relationships are tough to fathom, for both those involved in them and those who observe them. Games, personalities and circumstances so often get in the way of nurturing deep and satisfying relationships. What one partner values, the other may not; one partner can micromanage another’s actions and intentions while being blind to his/her own; even the most sincere feelings and intentions from both can fall sadly awry as time and life change who they are.

Such is the story of The Last Five Years, starring Diana Kaarina and Danny Balkwill. These two accomplished performers have come together to form LIONFISH Entertainment, dedicated to bringing fresh outlooks to Vancouver theatre. This self-directed play is their first production, and it bodes well for the future of this new venture. Their sensitive portrayal of a young couple who recount their relationship over five years was moving, and showcased their acting and singing talents.

This is a musical. The songs are the script, and the power is in the lyrics. Kudos to Jason Robert Brown for engaging musical arrangements and moments of real depth in his lyrics. The band, led by Michael Creber on piano, brought us effortlessly and unobtrusively into the lives of Cathy and Jamie as they fell in love, married, and saw their relationship disintegrate. The combination of piano, guitar, violin and cellos consistently created the ideal emotional backdrop for the scenes Cathy and Jamie told, she starting in the present, and he, starting in the past.

The simple sets, lights and costumes kept things grounded and real, allowing the audience to focus on the characters as they found moments of communion, despite being oblivious to those parts of themselves that would ultimately doom their relationship. There is no happy ending here - only a sense of loss of a love could have been beautiful but for the blindness of both to their effects on the other.

This is a performance worth seeing. The talent is there, and the musical script is moving - at times brilliant. It makes you think, and that’s a good thing.