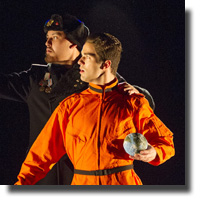 
It is certain that that crowd-pleasing crescendo of a curtain call the ensemble gave following their amazing performance was not the only reason for the loudly appreciative response of the audience that assembled on this sunny Sunday afternoon for the Studio 58 production of Kosmic Mambo. But the Russian dancing bit was artful, animated and entirely apropos.

Now to backtrack: there was a space race between Russia and America back in the 1960s, which the USA won when they landed on the moon, prompting Russia to send a manned mission to Mars. This play is about that mission.

More specifically, it is about a kind of space-age enactment of Samuel Taylor Coleridge’s “Rhyme of the Ancient Mariner.” So we have a raucous wedding party, and an old cosmonaut, the Commander, who captivates the attention of one of the guests. All action is non-verbal—purely physical enactments on a bare stage up until the retelling of the space journey by the commander, and Wendy Gorling does an amazing job of injecting the magical thinking into the performance here, juxtaposing Americans and Russians in two competing groups that portray blast-offs and moon-landings with dexterity and incredible stamina.

Another piece of this fine production that has to be seen to be appreciated is the versatile and realistic Shizuka Kai set design, particularly the four-piece interior of the cosmonaut’s space ship wheeled onto the stage, complete with a round portal facing the back wall to form the focal point for Corwin Ferguson’s adeptly-handled projections.

As conceived by David Mackay (who co-directs with Wendy Gorling), this production works well until the final consequences of the killing of the ‘pseudo-albatross’ wreak havoc on the cosmonauts, and spectres of death and destruction glide onto the spaceship through the round portal. Let me just say that not everything makes a lot of sense from this point forward.

But the fusion of music like Pink Floyd’s trippy “Set the Controls for the Heart of the Sun” adds a vital and vivid aural backdrop to the fine work the ensemble does portraying the weightlessness of the space journey contrasted with the sudden switch to gravity. Then, just prior to the surprising and energetic appearance of the ‘surrogate-albatross’ that kind of hatches from the bowels of a replica of Sputnik 1, the audience is treated to some more musical contortions as the cosmonauts begin freezing to the tune of Led Zepplin’s “Immigrant Song.” Brian Linds is to be commended for the incredible sound.

Mara Gottler produces some funky Sixties party wear for the wedding bash, but she saves her real energy for those bright orange jump suits that the cosmonauts move around in so energetically. Itai Erdal’s lighting works to great effect as well.

If you think this might be a great way to introduce young minds to Coleridge, you might want to bear in mind that this is nothing but a loose adaptation. As far as physical theatre goes, you won’t find much better, and though it rambles a bit conceptually, Kosmic Mambo is a great way for the whole family to spend an hour and fifteen minutes.