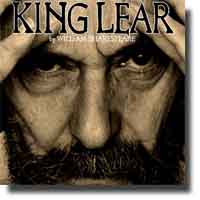 Opening night was a full-house, in this 60-seat theatre. The audience is taken on a journey towards madness, the madness of Lear, the madness of the Fool. The tiny space of the Havana was super-intimate: centrestage was so narrow that during the sword fights, the audience in the first row were fearful they'd get hit by the swords. There were only two rows in thrust stage structure. I was in the second row which was elevated, but the space between the first and second row was also used as stage space. The actors run through this space, inches away from the spectators. They sit down at their feet as they act out their lines, looking eye-to-eye at them.many times touching and leaning at them, leaving their props and costumes with them. Total immersion indeed!

Kevin Bennett did a superb job and Set Designer Shizuka Kai did an excellent rendition of what intimacy is all about. This is the kind of production that will keep you wide awake, because you're either in the middle of a sword fight, or an actor will lean towards you or sit down beside you. There is a gory scene where you can even get splattered with blood if you're sitting beside the actor who gets his eyes violently pulled out.

This is an experience worth going to. Gone are the proscenium stage days where we sat down comfortably and dozed off while watching Shakespeare. Here, immersion is the thing, and three hours will pass by quickly especially when you're in the middle of all the madness and action.