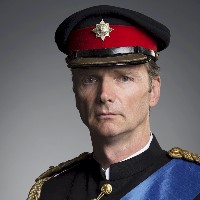 King Charles III is Mike Bartlett’s hypothetical drama that speculates on what might happen when eventually Elizabeth dies and Charles ascends to the throne. The show opens even before the play actually begins with the entire company dressed in appropriately dutiful black at Elizabeth’s funeral. Personally, I found it uncanny, even in a fictional account, to be looking at a coffin suspended by cables with Elizabeth’s body presumptively inside.

With its Machiavellian plotlines and the dialogue delivered in iambic pentameter (Shakespeare speak) King Charles III could believably be part of a Shakespeare festival. Bartlett’s premise of an immediate constitutional crisis was perhaps inspired by history. Charles I, whose quarrel with Parliament over his royal prerogative also precipitated a crisis.

Bartlett’s play is, of course, set in London sometime in the not too distant future. It supposes that Prince Philip has already passed and Prince Harry is still single. Theresa May’s Conservative government has long gone with the Labour Party in power headed by a Prime Minister Evans (Simon Webb) who curiously bears a passing resemblance to Jeremy Corbin (current Leader of the Opposition).

While there are no ‘evil villains’ in Bartlett’s theoretical scenario, some members of the present royal household come in for some rather duplicitous treatment. Harry (Charlie Gallant) is portrayed as an immature, raffish flake, while his older brother William (Oliver Rice) is a reluctant colluder. On the other hand, Gwynyth Walsh gives her character personality that the real Camilla likely doesn’t possess. However, it’s Katherine Gauthier as the politically ambitious Duchess of Cambridge (Kate) who threatens to steal the show. A powerful presence in this play, there is a deliberate coincidence to Lady Macbeth in her attempt at implicit regicide.

What King Charles III gives up in character development, it at least partly makes up for as an intriguing hypothesis. It may suffer slightly from taking itself too earnestly. With so much potential ammunition, a little more irony wouldn’t have been amiss.