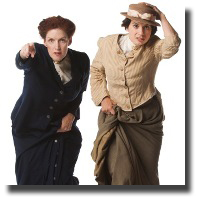 "Solid acting" would perhaps be the phrase I'd use for the performance of these actors, especially Scott Bellis in his dual role as Conor O'Rourke, the King of Vancouver brothels in the 1900s, and also as the patronizing oldtimer Constable Fields.

Kid Gloves presents a fictionalized account of Vancouver's first two female police officers hired in 1912 by the Vancouver Police Department. With prostitution and other crimes committed by women on the rise, Constables Lurancy Harris (Colleen Wheeler) and Minnie Miller (Dawn Petten) are hired to deal with the female morality question.

However, the play starts losing focus in the second act when more emphasis is put on Mai Ji, a white woman posing as a Chinese prostitute. There's even a Charlie Chaplin song and dance number where Mai Ji (Marlene Ginader) plays Chaplin and O'Rourke dresses up like a woman. Although this scene was a bit amusing, it appeared to me to be some kind of a filler rather than an essential part of the story of the two female constables. I got the impression that the focus was now on Mai Ji.

But despite the flaws in the playwriting, these seasoned actors, including Deborah Williams who also plays two roles, Gertrude Crane and Bella Boychuk, balanced off the inconsistencies of the storyline, and Donna Spencer did a fine job directing these actors. I also liked the set and visual design by Francesca Albertazzi who flashed old photos of Vancouver in the early 1900s before the show started..