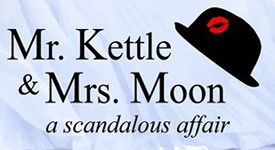 British playwright John Boynton Priestley’s infrequently mounted comedy, Mr. Kettle and Mrs. Moon is much like most of his plays, it puts sub-ordinary people into bizarre situations. It’s set in a small industrial English Midlands town with little or nothing to hold on to its current residents or attract new ones.

George Kettle’s well-organised life is not just dull, it’s boring. A proletarian branch manager at a local bank exists within a tiny framework of social activity, until one rainy Monday morning, not unlike any other, he suddenly has an epiphany. Instead of heading straight to his workplace, he decides on a detour that takes him past a toy store. His purchase of a familiar children’s game and his overwhelming eagerness to take it home sets off a chain of events that causes a crisis of identity with unforeseen consequences.

Kettle’s new found activity, or lack thereof, brings about a procession of people visiting his flat interested, concerned or just plain curious in the rational for his self-imposed hegira. His housekeeper Mrs. Twigg and her daughter Monica, Alderman Hardacre, Police Supt. Street, regional boss Clinton: everyone seems to think that poor George has lost it. Everyone that is, except Delia Moon.

Western Gold Theatre’s ‘script-in-hand’ presentation brings together a top-notch cast and crew who have all been in much bigger productions, Glenn MacDonald’s detailed set and clothing designed by the cast themselves is certainly evocative of Britain in the fifties (believe me, I was there). Director Anna Hagan keeps the action ticking along at a slick pace that still takes time to absorb the humour.

Tom MacBeath (Kettle) and Bronwen Smith (Mrs. Moon) show the audience wonderful chemistry in their ‘scandalous’ tryst. Emmelia Gordon as Monica Twigg keeps the laughs coming with her flare for physical comedy. At the other end of the scale, William B. Davis, well known for his iconic role as the ‘Smoking Man’ on The X-Files, delivers a brilliant tongue-in-cheek performance as the bromidic Henry Moon.