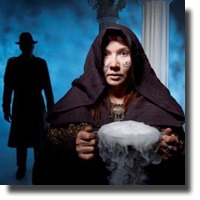 While reflecting upon the opening night Studio 58 performance of Julius Caesar, I was reminded of the line in one of my favourite Ani DiFranco songs called Buildings and Bridges that goes, “what doesn’t bend breaks.” Successfully gender-bending traditionally male-dominated roles like Brutus, Cassius, Caesar and Octavius is no small engineering feat, but director Scott Bellis has built a production dominated by female leads whose performance puts the lie to Portia’s plaintive lament about having “a man’s mind, but a woman’s might.” Everything from the fine female acting to the subdued intensity of patriotism-at-all-costs at the heart of this highly charged dramatic performance goes a long way to revealing that women are increasingly at least equal, if not superior to men.

Leslie Dos Remedios portrays Caesar’s unmitigated arrogance with a temerity and irascibility that at once proves and disproves Cassius’ impugning characterization of him, casting this conspirator and chief instigator of the assassination as both petty and petulant. All of which confirms what close readers of Shakespeare’s Roman play have known all along about Brutus being a poor judge of character.

Andrea Houssin plays Brutus with an energy and commitment surpassed only by the intensity of her dramatic ability to communicate her character’s intentions with voluble force. Ms. Houssin does a fine job of portraying an honourable Roman whose dogged determination to ideals blinds her to the mendacious ways and means her much more pragmatic peers use to enlist her support for their murderous plans.

Both of these two leads are involved in same-sex marriages, but there is a notable absence of torrid passion and smouldering sensuality in these relationships. More emphasis seems to have been placed on the stoic Roman virtue of restraint, in both the arenas of personal relationships and professional relationships. Even in the midst of an electrical storm, while men like Casca are getting carried away emotionally, a woman like Cassius adopts an alluring pose seemingly to attract him, but it goes nowhere. Any emotional entanglements are best left to the viewer’s imagination.

If Kazz Leskard’s Casca seems to miss his opportunity with Lindsay Winch’s momentarily sultry Cassius, it might be because he lacks energy. His Casca kind of goes through the motions of seeming excited about the storm, but this part of his performance has none of the the gossip-mongering gumption it holds when he is first asked by Brutus and Cassius about Caesar’s speech at the Lupercal. This initial appearance is an admirable portrayal of Casca the busybody. Thereafter, Mr. Leskard falls into a kind of theatrical torpor.

Lindsay Winch invests her Cassius with an understated flamboyance, a kind of austerely aristocratic superciliousness that sounds convincingly sincere as it ingratiates itself to Brutus under the mantle of an appeal for conspiracy against Caesar in favour of the common good. Ms. Winch is convincing in her role as a traitor, especially when she adopts her incredulous tone after Brutus consents to have Antony speak at the funeral; however, she is less believable as a soldier in the final scenes of the play.

Tim Carlson runs hot and cold in his role as Mark Antony. In the aftermath of the assassination, he appears believable as Caesar’s grief-stricken friend whose only option seems to be to find the will to compromise his integrity to secure his political future. Mr. Carlson skilfully runs a gamut of emotions before revealing his true intent in a powerful build up to the potent and voluble “Cry havoc and let slip the dogs of war!” However, the funeral speech to the commoners seems rushed. When it comes time to pause because his “heart is in the coffin there with Caesar,” it seems like more of a beat could be taken. Finally, the line that is supposed to trigger the commoner’s revolt, “Here was a Caesar! Whence comes another?” seems to be delivered almost as an afterthought, instead of with the dramatic intensity with which it ought to be released.

Agnes Tong outperforms all soldiers in her role as Octavius. She puts a lot of sizzle in her portrayal of this military leader, a provocateur whose potent studies in bravado are a high point of the carefully choreographed battle scenes rendered with such subdued intensity near the end of this play.