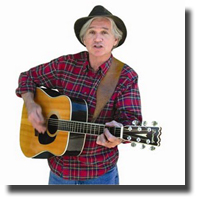 Johnny Canuck is a one-man-show written by the late Jovanka Bach and brought to the stage by her husband John Stark. Part revue and part musical odyssey, it’s a tale of an aging troubadour who returns home from life on the road to find a “Dear John” letter from his wife Beth. Our hero is baffled as to why Beth would desert him, so he leaves the couple’s 13-year-old daughter Lilly Sue with an Aunt and treks halfway across Canada in search of her.

The show’s narrative is driven by a combination of incidental dialogue and sixteen songs equally split between traditional Canadian folk tunes and original compositions by the playwright and the show’s only live performer, John DeYoung. Deyoung has a pleasant enough voice and generally does well with most of the songs that are sung and played in the same tempo; though he’s phrasing is forgivably lacking on Sans Ton Amour (without your love).

DeYoung enters onto the bare stage with a guitar slung over his shoulder, wearing blue jeans and a plaid shirt. Beth, who is never seen onstage, reads her note aloud whilst writing it on video. Throughout the show images intended to help the narration are projected onto a screen at rear-centre stage – some deliberately amusing, others more abstract.

Director/Producer John Stark, who only recently discovered his wife’s manuscript for the play, has obviously made the production a labour of love. He maintains a light touch but steady hand, allowing DeYoung to pace the 60-minute show. Chatting to Stark before the show, he comes across as quite a raconteur, ready with dozens of anecdotes available to anyone prepared to listen. One of his first acting gigs was as an extra in the original 1957 film 3:10 to Yuma, but don’t look for his name in the credits, his part was edited from the final cut.

Johnny Canuck premiered Experimental Theatre in Albuquerque, New Mexico last month. There were barely fifty people in the audience at Waterfront Theatre for its Canadian premiere – the show deserves much better than that.